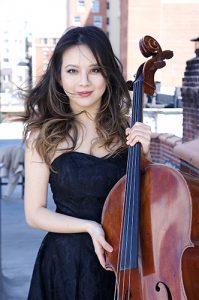 There is a suggested admission of $20 for adults; Students may attend free of charge.

About Sumire Kudo:
Cellist Sumire Kudo joined the New York Philharmonic in June 2006. Previously she taught at Indiana University–South Bend and was the cellist of the Avalon String Quartet. Born in Tokyo, Japan, Ms. Kudo began cello studies at age four with her father, cellist Akiyoshi Kudo. Her honors include the Hideo Saito Memorial Fund Award, which she received from the Sony Music Foundation after being chosen by Seiji Ozawa and Tsuyoshi Tsutsumi as the most promising cellist in 2005, and prizes at the Sapporo Junior Cello Competition and 62nd Japan Music Competition. Ms. Kudo is a graduate of Tokyo’s Toho School and The Juilliard School.

About Hoff-Barthelson Music School:
Hoff-Barthelson Music School has achieved national recognition as a premier community music school for its unsurpassed leadership in education, performance and community service. With a faculty drawn from the region’s most talented teachers and performers, the School has long been one of Westchester County’s most cherished cultural resources. Open to people of all ages and abilities, Hoff-Barthelson serves as a center where anyone can pursue their interest in music and reach their highest potential. Students encounter a vibrant, nurturing community of music-makers, often forming relations that last a lifetime. The School will celebrate its 75th anniversary in 2019-2020.