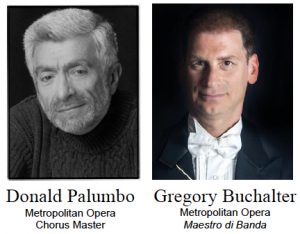 The Company is also presenting a new award this year, named the NRO Standing Ovation Award. The award is presented in grateful appreciation to the recipient for their support to New Rochelle Opera or the arts in Westchester County through extraordinary service and dedication. The inaugural recipients are former NRO Board President Victor Stanionis and his wife Lydia Stanionis, whose support helped shepherd the Company during its infancy.

Donald Palumbo is the Chorus Master of the Metropolitan Opera, responsible for the Chorus’ preparation and performance in upwards of 25 productions each season. This appointment followed a 16-year tenure as Chorus Master at the Lyric Opera of Chicago. Mr. Palumbo was the Music Director of the Chorus pro Musica of Boston and has also served as Chorus Master of the Canadian Opera Company, the Dallas Opera, the Banff School for the Arts Summer Opera Program, the Opera Company of Boston, and Opera Theatre of Saint Louis. In Europe, Mr. Palumbo has held the position of Chorus Master at the Opéra de Lyon, the Aix-en-Provence Festival, and the Teatro Massimo in Palermo. He has worked extensively at the Théatre du Châtelet in Paris, and has conducted the Radio France Chorus in several a cappella choral concerts.

Gregory Buchalter was one of NRO’s first conductors, having started with the Company’s 1987 production of Madama Butterfly, and went on to conduct most of the productions until 1996. He is currently on the music staff at the Metropolitan Opera where the position of “Maestro di Banda” was created for him. Mr. Buchalter has worked extensively with the Metropolitan Opera Chorus and has been Chorus Master at the Met for several productions including the telecast of Franco Zeffirelli’s production of Don Giovanni and Gershwin’s Porgy and Bess. Mr. Buchalter has also prepared several world premiers at the Met: John Corigliano’s The Ghosts of Versailles, Philip Glass’ The Voyage, and John Harbison’s The Great Gatsby. He was the first American to conduct with the Kazakhstan State Opera, and has been Chorus Master of the Santa Fe Opera, Bregenz Festival in Austria, Theater des Westens in Berlin, and the Chautauqua Symphony Orchestra. Mr. Buchalter is the Artistic Director and conductor of Opera Fairbanks, Opera Las Vegas, Opera Camerata of Washington, and an active symphonic conductor.

New Rochelle Opera Company was formed for the purpose of presenting imaginative and appealing operatic productions to the Westchester community. It serves to create a deeper understanding and appreciation of live opera, and make it accessible and affordable to a diverse audience. The company presents the art form in various capacities–fully staged performances, concert, school programs, workshops and demonstrations–engaging aspiring young artists as well as experienced professionals. www.nropera.org