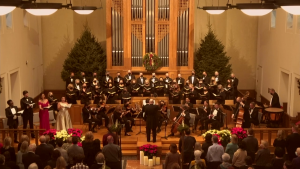 An Afternoon of Chamber Music on February 20, 2022 and

The New Choral Society, under the direction of Dr. John T. King will present two exciting concerts in the coming weeks. “An Afternoon of Chamber Music,” on Sunday, February 20, 2022 at 3 PM at Hitchcock Presbyterian Church features the talented musicians that make up the New Choral Society orchestra and showcases these instrumentalists in a program of traditional chamber music works, as well as introducing new works.

Two weeks later, the chorus will present Haydn’s Theresienmesse and Mozart’s Sparrow Mass on Sunday, March 6, 2022 at 3 PM at Hitchcock Presbyterian Church. The award-winning chorus, based in Scarsdale, has become known throughout the tri-state area for its outstanding musical accomplishments, presenting choral masterworks for the past 28 years.

The program will begin with one of Mozart’s early Masses, the Sparrow Mass. It is considered a Missa Brevis because of its length but is a festive setting with trumpet and timpani, making it a perfect pairing with the Haydn. Haydn’s extraordinary Theresienmesse in B-flat major, written in 1799, belongs to a series of six masses he wrote to celebrate the name day of Princess Maria Hermengilde, the wife of his patron, Prince Esterhazy II. It is a gem, with all of the variety, energy and contrapuntal skill of Haydn at the height of his compositional career, yet, its unusual scoring creates a unique mellowness not found in any of the other masses from this period.

This concert features four up-and-coming soloists selected by the Lindemann Young Artists Development Program of the Metropolitan Opera (LYADP); three of the four soloists are currently on the LYADP roster, and the fourth was in their final round of National Council Auditions.

Soprano Amani Cole-Felder is in her second year at The Lindemann Young Artist Development Program. This season, Amani made her Metropolitan Opera debut as Strawberry Woman in Porgy and Bess. Upcoming roles include Donna Anna in Don Giovanni with the Aspen Opera Theater in summer 2022. Amani most recently performed the role of Pamina in The Magic Flute with the Aspen Opera Theater in summer 2021 as an inaugural Renée Fleming Artist Fellow, under the direction of Renée Fleming and Patrick Summers. In 2021, she performed as a guest soloist in Brahms’ Ein Deutsches Requiem and Vaughn Williams’ Serenade to Music with the Capital Singers of Trenton.

South African mezzo-soprano Siphokazi Molteno is in her her first year in the Lindemann Young Artist Development Program at the Metropolitan Opera. She was previously a member of the Young Artist Program with Cape Town Opera, where she recently sang Romeo in I Capuleti e i Montecchi and Third Lady in The Magic Flute.   In 2020, Ms. Molteno won the Rising Star Encouragement Award in the Glyndebourne Opera Cup and Best Opera Performance in an Opera – Female in the Fleur du Cap Theatre Awards in South Africa for her 2019 portrayal of Romeo in I Capuleti e i Montecchi with Cape Town Opera.

Born in New Zealand, Tongan Tenor Manase Latu is entering his second year in the Lindemann Young Artist Development Program at the Metropolitan Opera. He will make his house debut this season in The Magic Flute and Brett Dean’s Hamlet. Future engagements include Don Ottavio in Don Giovanni with the Aspen Opera Theater in summer 2022. A previous Dame Malvina Major Emerging Artist, he has covered and performed roles such as Spoletta in Tosca, Nemorino in Lelisir D’amore, Defendant in Trial by Jury, Parpignol in La boheme, and Count Almaviva in Il barbiere di Siviglia all with the New Zealand Opera.

Hitchcock Presbyterian Church is located at 6 Greenacres Avenue in Scarsdale, and is wheelchair accessible, has free parking all around the building and boasts a sanctuary, used for concerts, that is acoustically renowned in the area.

Tickets for the single performance are available in three categories: Preferred Seating – $30; General Admission – $25; and a discounted General Admission ticket for Seniors and Students – $20. To purchase tickets, please visit www.newchoralsociety.org or call the office at (914)725-1678.