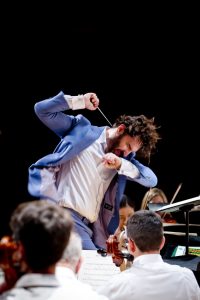 When Australian conductor Russell Ger directs an orchestra, he is full of passion. On Friday, October 30 at 8pm, he will lead a virtual whirlwind tour of music history: 1,000 years in 60 minutes! Hosted by the Music Conservatory of Westchester, a renowned community music school based in White Plains, NY, this live, interactive event presented via Zoom, will dive into Baroque, Romantic and other periods, explore the music of Mozart, Tchaikovsky, and other great composers, and help audiences understand how music of the past connects to the present.

“We’re excited to expand our offerings to include opportunities for adults who love music and want to learn, but don’t necessarily play an instrument,” Conservatory Executive Director Jean Newton said. “Even as a virtual presentation, this is the perfect way to keep music in our lives.”

Have you ever wondered what people mean when they talk about Romantic or Baroque music? Did Mozart and Tchaikovsky ever have brunch together? Making sense of music history can sometimes seem as esoteric as paleontology. With conductor Russell Ger as your guide, you will see and hear the whole past millennium unfold itself before you in a matter of mere minutes. And as it flashes past, you will come to understand how this whole intricate puzzle is composed.

Free Admission. RSVP by emailing [email protected] or by completing the form: https://docs.google.com/forms/d/e/1FAIpQLSf0Fe5nwRKZDLc_znzq4b1bUBviHQHFl5hv1LLZU07YS3kUBQ/viewform

Russell Ger is an Australian conductor whose broad repertoire spans orchestral, operatic, and choral music, which he has conducted across North America and his home country. In September of 2016, Mr. Ger began his tenure as the new Music Director of the Greater Newburgh Symphony Orchestra. Mr. Ger was recently the winner of the Orchestra Prize and overall Third Place in the Makris International Conducting Competition in Belgrade, Serbia. He is also the 2014 winner of the prestigious Brian Stacey Memorial Trust Award for Emerging Australian Conductors. He was also among a select group invited to conduct a special showcase with the Melbourne Symphony Orchestra. In 2013, Mr. Ger was one of four Finalists from around the world for the prestigious 2nd International Chicago Symphony Orchestra Sir Georg Solti Conducting Apprenticeship. Mr. Ger has toured North America with renowned violinist Itzhak Perlman, promoting a recording for Sony of Jewish art-music made in 2012. A PBS special aired in 2014. Performances took place at the Hollywood Bowl with members of the Los Angeles Philharmonic before an audience of 10,000, and at the Barclays Center arena in New York for an audience of 6,000. The tour also drew capacity houses at the Boca Raton Arts Festival, Boston Celebrity Series at Symphony Hall, Ravinia Festival in Chicago, Long Island, and Toronto. One of the highlights of Mr. Ger’s early career came in 2003 when he conducted the Finale from Beethoven’s Ninth Symphony at the Sydney Opera House. www.russellger.com

The Music Conservatory of Westchester was founded in 1929 by a group of community members and renowned artists. Today, the Conservatory provides the extraordinary benefits of music to all in our community, from absolute beginners to advanced artists, with online and in-person one-on-one instruction, performing ensembles, theory, early childhood classes, lifelong learning for adults, and free community performances, serving more than 3,000 students each year from 4 months to over 80 years old. As a not-for-profit organization, the Conservatory is dedicated to serving the community and reaching out to those who would not otherwise have access. Our Scholarship Program provides tuition assistance for financially deserving students. The Music Therapy Institute brings music into the lives of 2,000 children and adults with disabilities each year through on-site and outreach programs. Healing Our Heroes offers military veterans a specialized music therapy program to help with recovery after their service. The Conservatory has inspired generations of students, and contributed to a vibrant musical life in the county, the region, and beyond. www.musicconservatory.org