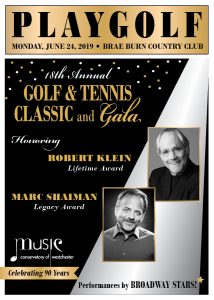 (White Plains, NY) At the Music Conservatory of Westchester’s 18th Annual Golf & Tennis Classic and Gala on Monday, June 24, the White Plains community music school will celebrate its 90th anniversary with a star-studded benefit. Comedy icon and Chappaqua resident Robert Klein and musical maestro of Broadway, television, and film Marc Shaiman will be honored for their distinguished careers and contributions to the performing arts at the event to be held at Brae Burn Country Club in Purchase, NY.

“We’ve been fortunate to have so many music icons involved with the Conservatory over the years,” Music Conservatory of Westchester Executive Director and Edgemont resident Jean Newton said. “It’s a real honor, and the perfect way to kick off our 90th anniversary year.”

The Music Conservatory of Westchester’s rich 90-year history dates back to 1929, when it was established at Scarsdale’s “Hyatt House” under the direction of Nicolai Mednikoff. Among the school’s original board of musical advisors were renowned cellist Pablo Casals, violinist Harold Bauer, and opera singer Elisabeth Rethberg. Today, in White Plains, the Conservatory provides the extraordinary benefits of music to all in our community, serving more than 2,800 students each year from 4 months to over 80 years old. The Conservatory is celebrating this year’s milestone with musical community events, including its upcoming 18th Annual Golf & Tennis Classic and Gala.

“On behalf of the Board of Trustees of the Music Conservatory and our passionate and dedicated staff, we are thrilled to have such a great lineup for our 90th Anniversary gala as we celebrate our community and the important mission of bringing music, healing and joy to our students and scholarship recipients,” Conservatory Board President and Scarsdale resident Joel Breitkopf said.

Robert Klein, known for his long-standing, four-decade comedy career, will be honored with the Lifetime Award. He opened the doors for the comics who have followed in his footsteps as the first comedian to appear in a live stand-up comedy concert on HBO. A life-long New Yorker with two-time Emmy nominee for his HBO comedy specials and two Grammy Award nominations for Best Comedy Album for Child of the Fifties and Mind Over Matter, he is often considered a legend by fans and is a favorite at The Tonight Show with 100 appearances to date. He also received a Tony Award nomination and a win from the LA Drama Critics Circle Awards for his performance in the Neil Simon musical, They’re Playing Our Song. In addition to his countless on-stage credits, he is also recognized for his wit and humor in film roles and in recurring guest-starring roles on television in Law & Order and Will & Grace. 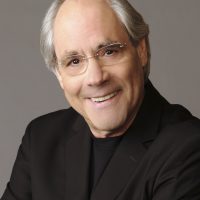 “The Music Conservatory of Westchester puts its resources into the most wonderful and imaginative pursuits, proving that the gift of music can do so much. It is my honor to be honored by them,” said Lifetime Award honoree Robert Klein.

Marc Shaiman will receive the Legacy Award from the Music Conservatory of Westchester for his incredible contributions to music both onstage and onscreen. A Tony, Grammy, and Emmy Award winner, and seven-time Oscar nominee, he is known for his songs and scores of such Broadway favorites as Hairspray, Catch Me If You Can, and Charlie and the Chocolate Factory, and television’s Smash, The Tonight Show, Saturday Night Live, as well as more than 10 appearances as musical director of the Academy Awards. He also wrote music for films When Harry Met Sally, Sister Act 1 & 2, A Few Good Men, and Hocus Pocus. Mr. Shaiman was nominated for the 2018 Oscar for Best Original Song and Score for Mary Poppins Returns. He is currently working on a musical version of Some Like it Hot for Broadway. For decades, he has composed some of the most memorable soundtracks and scores. 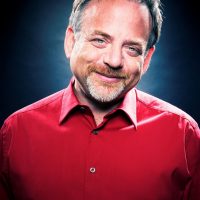 “The Music Conservatory of Westchester features teachers looking to give music students a step up and a helping hand to our veterans, and it all takes place in New York, the state I call home! Just those things prove to me that it is a wonderful organization, and I am humbled and excited to have been chosen for this wonderful honor!” said Legacy Award honoree Marc Shaiman.

“You have an opportunity to broaden your horizons through music at the Conservatory,” Executive Director Jean Newton said. “Music brings people together like nothing else. It’s the magic ingredient.”

Proceeds from the Music Conservatory of Westchester’s 18th Annual Golf & Tennis Classic and Gala will support its Music Therapy Program improving the lives of children and adults with disabilities as well as its Healing Our Heroes music therapy program serving U.S. military veterans with combat-related injuries and Scholarship Program providing students from financially-deserving families with access to quality music training. To purchase tickets, visit www.mcwevents.org.

For more information about this event and the Music Conservatory of Westchester, please contact Adriana Rivera, Communications and Development Assistant, at [email protected] or 914-761-3900 x135.

The Music Conservatory of Westchester was founded in 1929 by a group of community members and renowned artists. Today, the Conservatory provides the extraordinary benefits of music to all in our community, from absolute beginners to advanced artists, with one-on-one instruction, performing ensembles, theory, composition, early childhood classes, lifelong learning for adults, and free community performances, serving 2,800 students each year from 4 months to over 80 years old. As a not-for-profit organization, the Conservatory is dedicated to serving the community and reaching out to those who would not otherwise have access. Our Scholarship Program provides tuition assistance for financially deserving students. The Music Therapy Institute brings music into the lives of 1,900 children and adults with disabilities each year through on-site and outreach programs. Healing Our Heroes offers military veterans a specialized music therapy program to help with recovery after their service. The Conservatory has inspired generations of students, and contributed to a vibrant musical life in the county, the region, and beyond. www.musicconservatory.org