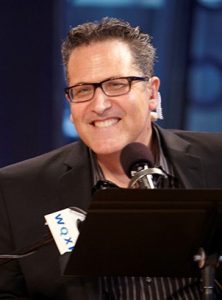 The Music Conservatory of Westchester in White Plains presents the final event in its four-part Musical Masters Lecture Series for adult music lovers on Sunday, May 19, 2019 at 2pm.

Lights. Camera. Action. Cue music! In this exclusive presentation of “Film Music: Groundbreaking Director/Composer Collaborations,” Peabody Award-winning Broadcaster & Producer and WQXR radio host Elliott Forrest will explore the unique relationship of film composers and directors, charting the evolution of the art form. Within the discussion, he will also address why film composers’ scores were initially not welcome for performance in concert halls and how that has changed today.

Film buffs and music lovers will experience an in-depth, interactive, cinematic ride. Through video clips from some of his favorite and historically significant films, Mr. Forrest will showcase music by such groundbreaking composers as Bernard Herrmann (Citizen Kane, Psycho, Vertigo, Taxi Driver), John Williams (Star Wars, Schindler’s List), Nino Rota (The Godfather), Ennio Morricone (The Mission), Danny Elfman (Edward Scissorhands), and more. This exclusive event is not to be missed!

All Musical Masters Lecture Series events will take place at the Music Conservatory of Westchester, 216 Central Avenue, White Plains, NY 10606. Tickets for individual lectures are $25 each, available for purchase online at http://www.musicconservatory.org/musical-masters-lecture-series. 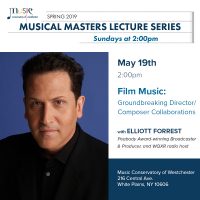 Elliott Forrest is a Peabody Award-winning broadcaster, director and producer. He is the Director of the PBS TV Special: CONSIDERING MATTHEW SHEPARD and Co-Director of the live tour. Elliott is the afternoon host on New York’s Classical Radio Station 105.9FM, WQXR, host of the radio concerts of The Chamber Music Society of Lincoln Center, and has hosted more than 60 concerts on-stage at Carnegie Hall. He regularly produces/directs and designs symphony concerts around the country: Gutterdämmerung for LA Philharmonic, Babar The NY Philharmonic, Tribute to NASA for Houston Symphony, Symphonic Sports-tacular and Spectacular for the Philadelphia Orchestra, Symphonic Spectacular for Atlanta Symphony, MLK Tribute/Appalachian Spring for the New Haven Symphony, Symphonic Spectacular for the Pasadena Pops and multiple concerts for the Little Orchestra Society in venues including the Hollywood Bowl, Lincoln Center, Philadelphia’s Mann Center. He is the Executive Artistic Director or ArtsRock.org of Rockland County, NY, bringing professional concerts and conversations to the community. Orchestra narrator: Saint-Saens’ Carnival of the Animals, Peter and the Wolf, Stravinsky’s Soldier’s Tale and Britten’s Young Person’s Guide. For 12 years he was on A&E Television as host of Breakfast with the Arts. He appeared on the original GONG SHOW on NBC with Chuck Barris. BA in Theater from the University of Texas, Austin.   www.elliottforrest.com