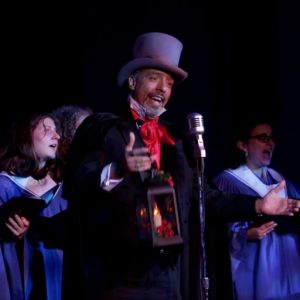 Music at Asbury Presents “God Bless Us, Everyone”

GOD BLESS US, EVERYONE

Tuckahoe, NY – Asbury-Crestwood United Methodist Church is delighted to present an encore performance of last year’s popular free holiday program, “God Bless Us, Everyone,” part of its Music at Asbury series. The show is a staged reading of Dickens’ classic holiday story, A Christmas Carol, complemented with songs by Alan Menken and Lynn Ahrens, Alan Silvestri and Glen Ballard, and a selection of familiar Christmas carols for the audience to sing along. This is a 75-minute program with no intermission.

Actor Miguel Angel Acevedo is a well-known face to community theater fans throughout Westchester County. In recent years, Miguel has had leading roles with the Clocktower Players, Harrison Players, Yorktown Productions, Armonk Players, Pleasantville Music Theatre and performed and choreographed eight shows for Asbury Summer Theatre during its tenure; he is currently starring in the title role of Jekyll & Hyde at the Wilton (CT) Playshop. Mauro Contrastano is an accomplished musical theater actor and director, having performed in twenty-four productions and directing four musical revues for Asbury Summer Theatre from 1987 until 2007. Mauro has performed in productions with the St. Joseph’s Players in Bronxville, Town Hall Community Theatre in Eastchester, Four Star Players in Yonkers, New Rochelle Community Theatre, and has performed and directed for Actors Conservatory Theatre in Yonkers. Mauro is currently the director of theater programming at the Pelham Manor Club. Originally from Nashville, Tennessee, Laura Leopard’s credits include An Ideal Husband at The Paper Mill Playhouse in New Jersey, Quartett at Brooklyn Academy of Music, Amadeus at the Barter Theatre in Virginia, and Claire in Proof at Mill Mountain Theatre in Virginia. She is also a founding member of Gotham Radio Theatre, which performs classics from theatre, literature and the silver screen with actors and sound artists performing live in vintage radio style. J.T. O’Connor’s television and film credits include The Gilded Age, Evil, FBI: Most Wanted, The Good Wife, Law and Order: SVU, Alpha House, One Life To Live, The Wolf Of Wall Street and Bridge of Spies. Theatre credits include the National Tour of Fiddler On The Roof w/ Theodore Bikel. Gypsy x/Joyce DeWitt, The Hound of the Baskervilles, High Spirits, A Christmas Carol, Uncle Vanya, Angel Street, Annie Get Your Gun, Wait Until Dark, Funny Girl, Moon Over Buffalo, and Kiss Me Kate. J.T. O’Connor is also a longtime cast member of the Gotham Radio Theatre group.

Mary Thombs, music director, has served as Minister of Music for Asbury United Methodist Church in Tuckahoe since 2006, where she directs both the adult and children’s choirs, plays the organ, and appears regularly as a soprano and violin soloist. She has been a member of the violin and voice faculties of the Riverarts Music Program in Hastings-on-Hudson since 1996 and served as head of the voice faculty at The Dwight Conservatory in NYC from 2005-2020. Jonathan Riss of Yonkers, organist, is the music director at Irvington (NY) Presbyterian Church, Director of Choirs at Hastings High School and Farragut Middle School, as well as Music Supervisor for the Cultural Arts Playhouse in Plainview, NY.  He is the 2013 recipient of the American Guild of Organists Choir Master Prize and earned the distinction of Fellow of the American Guild of Organists in 2016. Founded in 2016 by Amanda Gundling, The Westchester Children’s Chorus provides a community-based opportunity for students to further develop their vocal skills, musicianship and artistry through a shared engagement in singing. A diverse community of children comprise four auditioned ensembles spanning 1st – 12th grade. Cantus is an ensemble of 18 girls, grades 3 – 5, and is conducted by Anne Crozier.

Reservations are strongly suggested.  Reservations can be made online at http://www.musicatasbury.com/UpcomingEvents.html or by calling the church office 914-779-3722 and leaving a message with name, phone number, email address, and number in your party. All reservations will be confirmed by email or phone.

Music at Asbury was launched in November of 2014 by Lu Gmoser, founding producer of Asbury Summer Theatre, and Dr. Earl F. Groner.  As a program of Asbury-Crestwood United Methodist Church, Music at Asbury is designed to serve as a social service to the community, offering free performances by some of New York City and the Hudson Valley’s finest musical artists.

Program is made possible in part by a 2022 Arts Alive Grant from ArtsWestchester and an Art$Westchester Challenge Grant.

Asbury Church was founded December 10, 1771 and has worshiped as a congregation continuously in Tuckahoe for 250 years. The Rev. Jason Radmacher is pastor of Asbury Church and Mary Thombs is Minister of Music and Chair of Music at Asbury.

About Music at Asbury UMC

Asbury-Crestwood United Methodist Church has a long history of outstanding music programs and a record of community service. Asbury Church and its music directors have presented choral and organ concerts to the public over many years and the Asbury Summer Theatre group operated for 32 years, presenting over 30 sold-out shows to thousands of delighted audience members. In the fall of 2014, we introduced a new three-concert series, Music at Asbury. As a program under the auspices of Asbury-Crestwood United Methodist Church, Music at Asbury has been designed to serve as a social service to the community, offering free admission to the general public for all of its concerts and reaching out to local agencies and facilities that serve the elderly, young people, Veterans, and lower income families and adults. Music at Asbury is proud to feature a wide variety of engaging, appealing, and top quality performances to entertain and educate our audiences. The series is made possible by contributions from audience members and the Asbury church community, by the local business and civic community through program advertising, and through the support of Arts Westchester’s Arts Alive grant program.