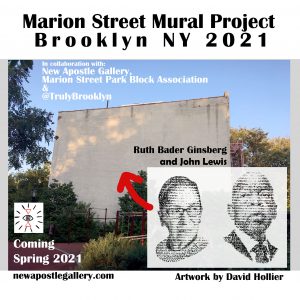 New Apostle Gallery is pleased to announce our mural project in Marion Street, Brooklyn featuring the artist David Hollier. The project is in collaboration with Marion Street Park Block Association and the lifestyle platform @TrulyBrooklyn. And, it is the honor of John Lewis and Ruth Bader Ginsberg. The mural is currently due to be painted during the weekend of April 30th and May 2nd, 2021. In order to support the project, people can make donations to the fundraiser on the GoFundMe page.

The project is to celebrate the legacy of John Lewis and Ruth Bader Ginsberg. Two of the greatest public servants of our time, sadly taken from us in 2020. They spent almost their entire lives fighting the repression they found themselves in as young adults. Although their careers have paved the way for equality for all people, their continued activism to their final days is a reminder to all young adults of today that the fight has not yet been won. In order to not let their tireless work be in vain, we must all pursue the goals they helped initiate.

The artist David Hollier, who is also the founder of New Apostle Gallery, has painted numerous murals including one of Nelson Mandela in Bushwick, Brooklyn. His artwork often revolves around themes of social justice. David Hollier said, “I love doing murals. People don’t really know this, but the degree I studied in college was Public Art based. It is not just the challenge of creating artwork at such a giant scale that appeals to me, but also the opportunity to communicate things I feel strongly about. It’s important that the work resonates with the community where it’s created. That doesn’t always happen, but I feel this one really does.“

Messengers For A New World