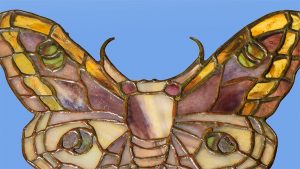 Exhibition Features more than 50 rarely seen works including early paintings and glasswork  on view in the Lyndhurst gallery and mansion, Tarrytown, NY
May 31, 2018 September 24, 2018 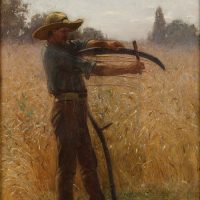 Louis C. Tiffany, The Reaper, 1879-1881. Oil on canvas, Collection of the National Academy of Design

April 10, 2018 Tarrytown, NY—A groundbreaking new exhibition of works by legendary artist Louis Comfort Tiffany will fill the Lyndhurst Mansion and gallery this summer. Charting the development of Tiffany’s career from the 1870s through the early 1900s, the display features more than 50 pieces, focusing primarily on early and rarely-exhibited works. The exhibit includes glass and mosaics from the Haworth Collection in Accrington, England, the home town of Tiffany’s glass foreman, rare textiles from the Mark Twain House, rarely seen early paintings from the Brooklyn and Nassau County Museums and furniture and decorative arts from the Driehaus and other notable private collections.

Based on new research, the exhibition conjures little known and unexpected dimensions of Tiffany’s career. Works in the exhibition reveal his radical exploration of racial inequality in the North, his work with the Jewish community on synagogues in Albany and Buffalo when such intermingling was not common, his pictorial documentation of rampant industrialization along the Hudson River, his adoption of Orientalist subjects, as well as his close but often difficult relationships with women patrons, collaborators, and designers. In particular, the exhibition re-establishes the reputation of Helen Gould, eldest daughter of railroad baron Jay Gould, as a significant Tiffany patron. 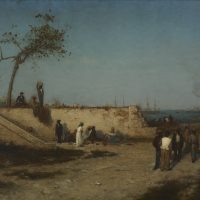 Tiffany is one of the most popular American artists, and his later work on Tiffany lamps and stained-glass church windows is well documented. Becoming Tiffany takes a different approach to the artist’s life and work and focuses on his early work as a painter and decorator, telling the story of how he used his wealth and position in society as the son of the founder of Tiffany & Co. to further his career. The first segment of the exhibition highlights Tiffany’s origins in the 1870s as a second-generation Hudson Valley painter, often considered a radical in both theme and technique. The Tiffany family summer home was in Irvington, New York overlooking the Hudson River and near Lyndhurst, the summer home of Jay Gould. Paintings, like his Pushing Off, Seabright New Jersey, Fruit Vendors Under the Sea Wall, Nassau, or The Reaper, Tiffany’s presentation piece to the National Academy, that outwardly appear to be bucolic landscapes or seascapes, or figure studies, actually track the economic disenfranchisement of African Americans who lose their jobs with the return of Caucasian soldiers to the North after the Civil War. Tiffany’s painting technique is also unusual for the time as he is one of the first American painters to travel to France and learn the lessons of French realism practiced by Courbet and the Barbizon school. Tiffany’s stark and rarely-exhibited painting Duane Street depicting the African American neighborhood that was destroyed to construct the Brooklyn Bridge is being lent by the Brooklyn Museum. 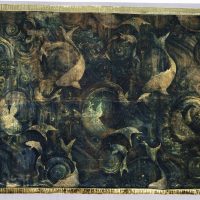 In the 1880s, finding that his paintings were sometimes too challenging for the market, Tiffany became an interior decorator, partnering in the firm Associate Artists with Lockwood DeForest and Candace Wheeler whose work was heavily influenced by their travels to India and Japan. Tiffany also traveled to Egypt and Morocco and began to incorporate Near Eastern genre themes and decorative patterns into his paintings, early glasswork and furniture. His work designing synagogues for the Jewish community at this time also helped him to fully formulate the use of such motifs in his decorative works.

The exhibition features several important works of DeForest and Wheeler from that period including carved teakwood furniture from a private collection as well as Wheeler’s Japanese-inspired textiles borrowed from the Mark Twain House. Also included in this section of the exhibition are a group of five Orientalist paintings by Tiffany from the Nassau County Museum of Art.

In addition to documenting Tiffany’s early career trajectory from painter to decorator, the exhibition also documents how Tiffany worked with wealthy neighbors, such as Jay Gould and his daughter Helen, to further his career. Based on photographs, catalogs and inventories recently received from Gould family descendants, Lyndhurst curators have been able to establish the Gould family as consistent and early purchasers of Tiffany’s works. Jay Gould commissions an early Tiffany window for the Gould family mausoleum at Woodlawn Cemetery, which will be exhibited for the first time. Lyndhurst also has a large suite of windows of the same time-period that are believed to be early Tiffany windows. Several works equivalent to those owned by the Goulds during this period are on loan for the exhibition, including lamps, furniture and stained glass. 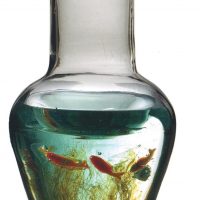 In the 1890s, after the death of her infamous father, railroad baron Jay Gould, Helen Gould became an astute collector of Tiffany’s finest decorative works, including the purchase of two aquamarine vases, generally considered to be the finest of Tiffany’s decorative glass works.  The Haworth Collection, in Accrington, England, is lending an aquamarine vase of goldfish swimming in reeds that Tiffany exhibited at the Paris Exposition of 1899. Helen Gould also commissions memorial windows for both her parents that are designed in 1894, when Frederick Wilson first assumes window design for the Tiffany ecclesiastical department.  The exhibition will exhibit the finely finished presentation watercolors for these windows that are among the earliest work of Wilson for the Tiffany studios.

The final section of the gallery exhibition features Helen Gould’s important Tiffany commissions for churches and libraries. These include correspondence pertaining to McKim Meade and White’s NYU Library, considered to be Stanford White’s finest building, which used Tiffany glass and mosaics.  Also on display are a rare Tiffany impressionistic window from the Irvington Presbyterian Church, donated by Tiffany to his family church, an early turtleback tile sconce from the recently-restored Irvington Public Library and the never exhibited window from the Gould Mausoleum at Woodlawn Cemetery in the Bronx. This is an early window commissioned by Jay Gould that Tiffany included in an exhibition he curated to raise money for the base of the Statue of Liberty. 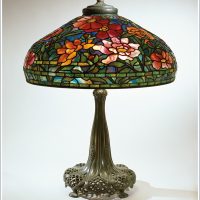 On June 3, 2018, Lyndhurst will host a public symposium on Tiffany’s career, focusing on new and ongoing research. Professor Roberta Mayer, who is working on a book on Tiffany’s paintings, will provide highlights of her ongoing research that has reidentified many of Tiffany’s early paintings and provides more accurate interpretation of their often-charged political subjects. Professor Patricia Pongracz will explore Tiffany’s work for two upstate New York synagogues and how that work informed and advanced his ideas and career. Professor Martin Eidelberg will discuss his research into Tiffany’s early work.  Sam White, AIA, a grandson of Stanford White, will discuss Helen Gould’s commission of the NYU Library, considered White’s finest building, and discuss Tiffany’s contribution to the building. Howard Zar, Lyndhurst executive director will explore Jay and Helen Gould’s overlooked roles as one of Louis Comfort Tiffany’s most important and consistent patrons.