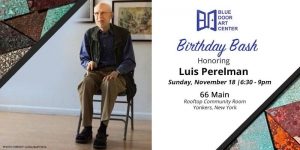 Luis Perelman is an artist, curator, co-founder and co-executive of Blue Door Art Center.  Ten years ago, Luis Perelman led a group that launched the Yonkers’ Downtown Art Scene. The Blue Door Art Center on Warburton Avenue marked the beginning of a renaissance that continues to flourish and grow with each passing year.  When he opened the Blue Door, it was the only space in the area that offered an opportunity for local artists to exhibit their efforts.  Now, ten years later, there are four art venues within a four block radius, where many Westchester artists continue to exhibit their work and participate in the weekly/monthly workshops. They will join in honoring Luis Perelman on Sunday, November 18, from 6:30 – 9pm at at 66 Main St., Yonkers, in the rooftop community room with views of the Hudson River.
Mr. Perelman was born and raised in New York City.  He received a degree from Columbia University and eventually worked with an architectural firm and as a city planner for many years before he began focusing on the creation of the  Blue Door Art Center, a not-for-profit art organization, which he co-founded and served as co-director.  It was through his devotion and determination that  it is now possible for children and adults alike to have a place to learn about, experience and create art.
Perelman is also a talented artist whose approach to art is the exploration of space and form. His recent work utilizes layers of metal formed into geometric shapes. His work has been exhibited in museums and galleries in New York and throughout the Northeast and is in the permanent collections of the Whitney Museum, the Neuberger Museum of Art and the Honolulu Museum of Art. In addition, it is in many private collections including those of Roy Neuberger, Phillip Johnson and I. M. Pei.  Perelman continues to show his work in New York and in Westchester.
We would be more than happy to provide you with photographs and/or would welcome a reporter to meet with Mr. Perelman.
For additional information or to arrange an interview,  please contact Michele Amaro at 914 375 5100; cell#  646 725 7272.
Previous post:
« Click! Photography Exhibit at the Blue Door Art Center
Next post:
11 Annual BDAC Artist Member Juried Exhibition »