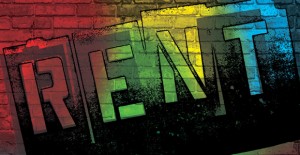 “NO DAY BUT TODAY…” – Little Radical Theatrics is thrilled to have been granted the rights to be presenting Westchester with a fresh interpretation of Jonathan Larson‘s gift to musical theatre, which will celebrate its opening night 20 years to the day of the original Broadway production. Winner of the 1996 TONY Award for Best Musical and the Pulitzer Prize for Drama, RENT has become a pop culture phenomenon with a score that soars and a story that truly resonates. Taking inspiration from Giacomo Puccini‘s La Bohème, it revamps the classic tale for a contemporary era. We begin on Christmas Eve 1989 in the East Village of New York City, and measure 525,600 minutes, a year in the life of a group of impoverished young artists and musicians struggling to survive and create under the shadow of pennilessness, drug abuse, social tension, and political unrest, among other hardships. The physical and emotional complications of HIV/AIDS pervade the lives of Roger, Mimi, Tom, and Angel. Maureen deals with her chronic infidelity through performance art; her partner, Joanne, wonders if their relationship is worth the trouble. Benny has sold out his Bohemian ideals in exchange for a hefty income and is on the outs with his former roommates. Mark, an aspiring filmmaker, feels like an outsider to life in general. How these eight friends negotiate their loves, hopes, struggles, and triumphs, facing their problems head on and making personal self-discoveries to find what really matters most in life, provides the narrative thread to this exhilarating, landmark rock opera.