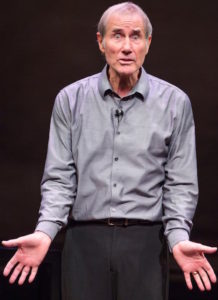 Croton Falls, NY (November 4) – The Schoolhouse Theater celebrates its holiday season with the return of Jim Dale in his second one-man show, Another Evening with Jim Dale. His matchless talent and humor will be on stage for three performances only: December 13 at 8:00p.m. and on December 14 at 4:00 p.m. and 8:00pm.

“I can’t think of a better gift to unwrap this December than to spend another evening with Jim Dale,” says Schoolhouse Theater Director Bram Lewis. ““With his quicksilver comic timing and incandescent heart he is an iconic member of Broadway’s Royal Family, a New York Treasure. So come see this brand new show and welcome back Jim!”

For his narration of all seven audiobooks in the Harry Potter series, Dale won a record ten Audie Awards (the Oscars of the narrating world), two Grammy Awards and seven Grammy Nominations. Other career highlights include an invitation from Lord Olivier to join the British National Theater as a leading actor, an Academy Award Nomination for writing the 1966 film song “Georgy Girl” and a British Academy Award Nomination for Best Newcomer. On stage, in the category of Best Actor, Dale won a Tony award for “Barnum,” five Drama Desk Awards, five New York Critics Awards and the Lucille Lortel Award. In 2009 he was inducted into the American Theater Hall of Fame, and received a lifetime achievement award in 2018 at Urban Stages New York City.

Tickets for all three December shows are $38 for adults and $35 for seniors, and can be purchased at www.schoolhousetheater.org or by calling The Schoolhouse Theater box office at 914-277-8477.

The Schoolhouse Theater and Arts Center is a cultural hub for innovative, groundbreaking professional theater, live music, entertainment and the arts – a place where things begin. To learn more visit www.schoolhousetheater.org or call 914.277.8477.