WHITE PLAINS, N.Y. (December 17, 2019) – ArtsWestchester, in partnership with LMC, a Lennar Company, is in the midst of transforming a construction barricade into a curated exhibit of six street murals beginning on Hale Avenue, wrapping around Maple Avenue and continuing on South Broadway in downtown White Plains. The five New York artists commissioned to paint each mural were selected through a competitive panel process managed by ArtsWestchester.

Janet T. Langsam, CEO of ArtsWestchester explains, “We are so pleased to bring more color, energy and excitement through public art to White Plains just in time for the holidays. Last year, we commissioned artist Wane One to paint a mural entitled, Brighter Colors Better Life, in front of our building on Mamaroneck Avenue and this year he is back to paint the first of the new murals to be revealed on S. Broadway, entitled, Celebration.”

Artist Wane One explains, “My title is taken from a quote from Prince who said, ‘Instead of hate, celebrate.’ Murals attract the most attention when they are new. Since this mural will be going up at the start of the holiday season, I drew inspiration from the spirit of the holidays when people step away from their harried day-to-day lives to celebrate with family and friends the positive things in their lives.”

Langsam continues, “Public art enlivens public spaces, enhancing the streetscape and the vibrancy of our downtown thoroughfare. The six new White Plains murals are unique in that they surprise you as you are driving or walking down the street. The artwork brings more beauty to the city and is presented for art enthusiasts and casual passersby to appreciate, to ponder, to enjoy. ”

Greg Belew, City President, NY Metro Area for LMC, says, “We believe in the positive impact public arts bring to a community. It creates a sense of excitement, a sense of pride and evokes emotion in those who view and interact with it. It’s an honor to partner with ArtsWestchester to bring this series of vibrant new works of public art to the City of White Plains. The curated set of murals creates an opportunity for residents and visitors of the City to experience something new. Each mural has been thoughtfully planned and created by a stellar group of New York Artists.”

Four of the six murals are complete, with the final two murals scheduled for installation in January.  The artists featured in the new series of murals presented by ArtsWestchester and LMC include:

Ann Ladd of White Plains, Oscar Lett of NYC, Jana Liptak of Brooklyn, Wane One of the Bronx  and Dan Carello of New Rochelle. 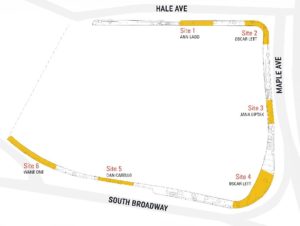 Ann Ladd is a White Plains resident with 25 years of mural painting experience. She has watched White Plains grow from a sleepy town where you couldn’t get an ice cream cone after 8pm to a thriving city full of art, music, weekly farmer markets, plus a vibrant night life where ice cream can easily be found 24/7.

Mural Statement:
The idea behind this mural is positive explosion, from small beginnings to endless possibilities. A painted stream of visual objects, creatures, food moving along with the traffic and walking community is meant to energize the viewer as they walk along S. Broadway. The mural begins with blue and gold swirls inspired by Van Gogh which turn into flying paint brushes swirling into musical notes, flying fish, buzzing bees, birds, produce, walking feet all ending with dozens of ice cream cones flying off the 8’ boards. The colorful pallet for this mural will include top quality mural paints, which will uphold the challenging N.Y. weather conditions.

Originally from Paris, Oscar Lett first studied art in France, then moved to London to pursue practice and studies at Central Saint Martins to then move to Japan for a bit less than a year and explore a long time fascination for the Japanese art culture. Well-versed in the teachings of Nihonga and more familiar with Asian techniques, the painter flew back to London to graduate and started to mix a European background with Asian influences and a growing affinity with Street Art.

Selected for an artist residency in New York shortly after, Oscar moved to New York City and decided to stay the term of the residency as the city responded positively to this large scale and cross-cultural practice. Now established in NY, Oscar pursues a fine art career on one hand while developing a considerable portfolio of murals on the other.

Mural Site 2:
My original mural design was of two bluebirds (one of the most commonly seen birds in Westchester which I picked for their colors and beauty) gawking at each other, which I found compelling and very relatable as per the way we look at each other in everyday life. I wanted to make this design elegant and poetic, with a peaceful yet strong visual impact. In-between the two birds I placed a symbol that does not represent anything in particular, it’s an abstract shape that represents what one aims to achieve or acquire. It is another way of welcoming the future residents of the complex with their aspirations and desires.

Mural Site 4:
After gathering information about the White Plains area, along with the documentation provided by ArtsWestchester, it was clear to me that a bright, colorful and inspiring design would be the way to go on my second mural. With this part of New York being in constant expansion and always welcoming more people, I thought the mural needed to represent the diversity of its population and answer adequately to its exponential growth.

With this in mind, I came up with a design with a bright, colorful background arranged in a rainbow manner with a multitude of birds flying around freely on the wall. From Blue Jay to Black Simmer, I picked birds that you can see in the state of New York, from endemic species to birds from migratory flows. This selection is to show that Westchester and the state of New York have always shown kindness and open arms to people of all origins and they can live freely, happily, ‘flying’ around as they wish, side by side.  Additionally, the colorful background is to reflect the vibrant aspect of the area and is also a reference to Stonewall’s 50th anniversary this year and its importance to the LGBTQ community.

Jana Liptak is a Brooklyn-based muralist and scenic painter with over 10 years experience in theater and movie production, large-scale outdoor and indoor installation pieces and specialty sign and residential painting. In an industry where women are woefully underrepresented, Jana’s (almost) all-female crew is capable of handling jobs of any size, from a 5-foot sign to a 10,000+ square foot installation. Jana has built a strong reputation in the arts and creative community for her professionalism, diverse skill set, and problem solving abilities.

Jana has a lifelong passion and innate talent for manipulating materials and acquiring new skills and techniques. She received an MFA from the University of Edinburgh in 2008, and has been a proud member of the United Scenic Artists Local 829 since 2011, where she completed a 3 year scenic artist apprenticeship. In addition to the exciting projects she produces as founder of Sepioid, Jana also has a robust fine art practice.

Mural Statement:
My mural is a series of cross-stitch motifs, done in a massive scale, representing a handful of the most endangered species in New York State. White Plains exists in a space between the dense urban landscape of NYC and the wooded rivers and mountains of the Hudson Valley. This space is essential to the wildlife of the region, and this mural is a call to explore sustainable and responsible growth through urban development. The cross-stitch pattern is a reminder both of the impending disappearance of these species and of the deep interconnectedness of all things. There is a pattern underlying all of creation that binds life, events, and eventualities together. We need to remember our place within the larger natural systems of this planet, and work together to find solutions to the climate and extinction events we are currently facing. The animals and plants illustrated are: Eskimo Curlew, Gilt Darter, Northern Cricket Frog, Seabeach Amaranth, Tomah Mayfly, Loggerhead Shrike. This design is a continuation of a piece I recently completed in Kingston NY.

New Rochelle native Dan Carello has been creating art in and around Westchester County for decades. An alumnus of the College of New Rochelle and the N.Y. School of Visual Arts, Carello has experimented with mediums including sculpture, painting and creating murals. In his most recent geometric-abstract painting series titled Arrows, Carello has used “arrows to represent movement and direction” as well as “utilizing vivid colors to provoke emotional excitement, in the viewer, and to add fullness to the abstract shapes.” Carello also includes the “Principles of Design: balance, rhythm, and variety” in his work.

Mural Statement:
The aim of my mural design is to express, in an abstract pictorial language that is appropriate for all ages and audiences, the racial, ethnic, and cultural diversity of the city of White Plains, NY. For example, I have utilized arrows to signify social progress, many vivid colors to imply diversity, and a woven surface motif to represent unity.

In 1991 I painted my first commissioned mural. Since that time, I have painted over 35 public murals in New York, numerous other locations in the US, and in Germany, Sweden, Canada, South Africa, Australia, Denmark, France, Norway, and China. My work has been shown in more than 20 solo and group gallery exhibits around the world and I am featured in 30 books and numerous magazines. Presently, Wane divides his time between painting in New York, across the US, and internationally, running his company Writers Bench, designing for Sean John Menswear, Nike, and Reebok and traveling around the world. Wane resides in the Bronx.

Mural Statement:
The design I created for the South Broadway mural project is called Celebrate. Taken from a quote from Prince, who said, “Instead of hate, celebrate.” Murals attract the most attention when they are new. Since this mural will be going up at the start of the holiday season, I drew inspiration from the spirit of the holidays when people step away from their harried day to day lives to celebrate with family and friends the positive things in their lives. Green plays a prominent role in this mural, subconsciously evoking the traditional colors of Christmas and Kwanzaa. Blue, a traditional Hanukah color, blends harmoniously with the green.

However, the overall color scheme of the mural does not overstate traditional holiday color patterns, thus making it a timeless piece that is not bound by the season. Similarly, the geometric star patterns in the mural are common in the holiday season, but also symbolic of hope and aspiration in any season. The other shape that is prominent in the mural is a deconstructed arrow. This symbol directly references the progress and evolution of this block and the whole city of White Plains.

For over 50 years ArtsWestchester has been the community’s connection to the arts. Founded in 1965, it is the largest private not-for-profit arts council in New York State. Its mission is to provide leadership vision and support to ensure the availability accessibility and diversity of the arts. ArtsWestchester provides programs and services that enrich the lives of everyone in Westchester County. ArtsWestchester helps fund concerts exhibitions and plays through grants; brings artists into schools and community centers; advocates for the arts; and builds audiences through diverse marketing initiatives. In 1998, ArtsWestchester purchased the nine-story neo-classical bank building at 31 Mamaroneck Avenue which has since been transformed into a multi-use resource for artists, cultural organizations and the community. A two-story gallery is located on the first floor of ArtsWestchester’s historic building on Mamaroneck Avenue.

Previous post:
« ArtsWestchester Distributes ,000 in Grants to Mount Vernon Artists & Arts Organizations
Next post:
ArtsWestchester Invites You to be Part of the Making of a Monumental Work of Public Art »