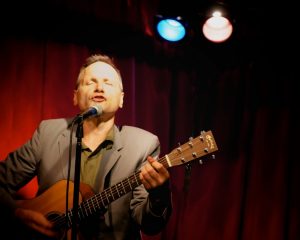 Free and Open to All Ages!

Known for his sophisticated yet accessible melding of rock, pop, folk, blues and country, Hersey is first and foremost a storyteller, one who happens to play a mean guitar. Beachsloth.com wrote that Hersey’s album, Dreamtime “proves to be an absolute, unhinged kind of joy, one sung straight from the heart, showing off [an] uncanny ear for melody.” And Tom Franks of folkwords.com wrote that Hersey’s Adirondack “is raw, hard, observant and thought provoking.”

Hersey performs as a solo act and as a member of the duo The Michaels. For many years he was the musical director, guitarist and second tenor for the legendary doo-wop group Speedo and the Cadillacs. In 2010, UMass Press published his book, Forever Doo-wop, about his experiences working with the Cadillacs and other vocal groups. As an actor he recently appeared as Joe Belarosky in the Theater for the New City production of William Electric Black’s Betty and the Belrays and as Warden Whalen in the La Mama production of Tennessee Williams’ Not about Nightingales.

Currently, Hersey serves as Manager of Creative Arts at The Fortune Society, a non-profit that provides services for people involved with the criminal justice system.

John is excited to share his talents with the Pelham community. Come enjoy this local live music experience.

Pelham Art Center is a non-proﬁt educational and cultural institution committed to providing public access to see, study and experience the arts, foster lifelong arts appreciation and thereby strengthen the community.  The Art Center was founded in 1970 and now serves more than 16,000 people each year.

These events and programs are made possible, in part, by the ArtsWestchester with funds from Westchester County Government. Pelham Art Center also receives funding from: New York State Council on the Arts, A State Agency; Westchester Community Foundation; Pelham Community Members and Annual Fund Donors.