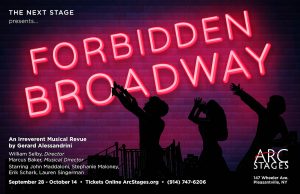 Pleasantville, N.Y. — Pleasantville theater company Arc Stages announces Forbidden Broadway to begin their fourth season for their professional company, the Next Stage. The Next Stage premiered three years ago with John Cariani’s LOVE/SICK and focuses on showcasing new, innovative work by a wide variety of exciting and talented writers. It is the third wing of a company that also includes a thriving Educational Stage and Community Stage.

Performances will be held at Arc Stages, located at 147 Wheeler Avenue in Pleasantville NY.

Just when Broadway thought it was safe from the poison pen of funny-man Gerard Alessandrini, Forbidden Broadway is back, this time at Arc Stages! The uproarious musical roast of Broadway that has picked up 9 Drama Desk Awards, a Special Tony®, an Obie, a Lucille Lortel and Drama League Award, features outrageous costumes, hilarious rewrites of the songs you know, and dead-on impressions by a stellar cast! Whether you’re a seasoned theatergoer or new to Broadway, Forbidden Broadway is your one-stop ticket to non-stop laughs.

Arc Stages is a multifaceted arts organization in Pleasantville, New York, which is composed of three theatre companies under one roof.

The Educational Stage: an educational theatre company where students of all ages (youth and adult) can explore the world of theatre through a professional rehearsal process, master classes, outreach and intensive ensemble work.

The Community Stage: a community theatre company for actors, singers and technicians from all walks of life that offers the best in American musicals and dramas.

The Next Stage: a professional theatre company that endeavors to produce high quality contemporary theatre as well as new works, cabaret, workshops and staged readings.

These three theatres, all under one roof, strive to better serve the community and its artistic needs. We are thrilled to be your artistic haven and look forward to creating more exciting, transformative theatre!