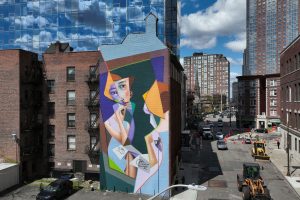 Take a walk around downtown New Rochelle and you’ll discover – potholes? Yes. Traffic tie ups? All the time. But there’s something else happening: Art.

“New Rochelle has always been a city with a focus on the arts,” observes Theresa Kump Leghorn, President of NRCA. “So when we saw what SAM was doing in other communities we reached out and invited them here.” With support from the City of New Rochelle, the result was the first set of 8 #NRNYMurals, which made their debut in November 2019.

“We had hoped to add more murals in “phase two” in 2020, but COVID intervened.,” explains Leghorn. “And then, after all that the city has been through over the last two years, we were really motivated by the idea of creating something joyful,” she says. “We are excited about the new murals, and so grateful for the leadership of the IDA, which provided significant funding and is in full support of this significant contribution to New Rochelle’s artistic flavor.”

The New Rochelle IDA is the public entity whose mission is to provide financial assistance through tax incentives to eligible projects in order to promote economic vitality and prosperity as well as recreational opportunities for the entire New Rochelle community, and Audrey and Thibault decker, founders of SAM, say the murals will delight the eye as well as enhance the city’s economy. “When we create Art Walk Murals in cities they help bond the community together. They create a kind of open museum, bringing out the diversity of art and democratizing it to give more people access,” Thibault Decker said. “They don’t have to go to a museum to interact with the art.”

“The 20 new SAM-curated murals are going to draw visitors to the city and encourage them to walk and explore the city streets – which means opportunities for New Rochelle businesses to introduce themselves to new customers. It’s a win-win,” says Lynn Green, Vice President of NRCA.

So what can people expect to see? Let’s start with a fresh take on New Rochelle’s best-known artist, Norman Rockwell. At 347 Huguenot Street the Spanish artist Belin (Miguel Ángel Belinchón Bujes) has used one of Rockwell’s most famous works, “Girl at Mirror,” as a reference for his Picasso-inspired mural. Known in the graffiti world for his photorealistic murals, Belin incorporates elements of cubism in his work, resulting in a style he has dubbed postneocubismo. (See more of Belin’s work on Instagram:  @belin.es )

Most people know that Norman Rockwell (1894-1978) was one of America’s leading illustrators, whose work appeared on the covers of the country’s major magazines for decades.  But many don’t realize that Rockwell’s family had moved to New Rochelle in 1915, when he was 21; the community was home base for many artists, including J.C. Leyendecker, Frederic Remington and Howard Chandler Christy. Rockwell painted his first cover for the The Saturday Evening Post in 1916, and became known for his observational style. He often used local people as subjects, a practice that continued after he moved to Vermont in 1939. Among his favorite models there was a young girl named Mary Whalen, who Rockwell described as  “…the best model I ever had. (She) could look sad one minute, jolly the next, and raise her eyebrows until they almost jump over her head.” Mary was the subject for one of Rockwell’s most enduringly popular works, “Girl at Mirror” – and in a neat twist of fate, Mary Whalen grew up, married, and had daughters of her own, one of whom, Stephanie Leonard Tomei, is a resident of New Rochelle.

Carlos Alberto is an artist from Guadalajara, Mexico who specializes in 3D effects. Trained as an art restorer, Carlos worked on restoring murals in the Yucatan peninsula before deciding to try his hand at creating his own work. Alberto says that during the COVID lockdown  he used the time to sharpen his 3D skills by creating trompe l’oeil images in colored chalk on his patio. He created a series of images in the same space, documenting the work on line; every time it rained the existing work was erased and he started over, constantly refining his technique. (See more of Alberto’s work on Instagram: @carlosalberto_gh )

For the New Rochelle Council on the Arts (with funding from ArtsWestchester’s ReStart the Arts grant program) Alberto has created two “interactive” murals designed to be photographed and used as “selfie” backdrops. At New Roc City – near the Regal Cinema complex – he chose to create a giant gorilla in homage to cinema icon King Kong. Working with house paint purchased from Home Depot applied through a sprayer he was able to create layers of depth by extending the image onto the sidewalk: In photographs people positioned correctly appear to be standing in the palm of Kong’s hand.

Near the city’s train station Alberto created another interactive mural on the bridge that spans I95 from Burling Lane. The theme here celebrates New Rochelle’s access to the Long Island Sound and the fun of water sports with leaping dolphins and a surfboard: People can position themselves for photographs so they appear to be riding the surfboard. Again, Alberto has mastered perspective: Indeed, from certain angles the image doesn’t “read” at all. Not surprisingly there is art historical precedence here: Anamorphic perspective can be seen throughout history, perhaps most famously in Hans Holbein’s “The Ambassadors” (1533) where a distorted skull in the center of the frame can only be properly appreciated from one specific angle.

Representation matters, even in the art world. “It’s important for young people to see artists who look like them,” says NRCA’s Leghorn. “As they say, you have to see it to be it.” So she appreciates the diversity of backgrounds in the SAM artists, especially the fact that two of the mural artists are female: Adry Del Rocio and Vinie Graffiti have each made a name for themselves in a physically demanding, male dominated niche.

Adry del Rocio is a Mexican street artist, originally from Guadalajara, and one of the most recognized 3D urban artists in the world. She began her career as a painter after winning a children’s art competition at the age of 4, and since then Adry has won  local, national, and international awards, including the title of “Maestra Madonnara” in Italy in 2014.  (See more of Adry’s work on Instagram:  @adrydelrocio )

For New Rochelle del Rocio created a gorgeous mural in an unlikely spot at 13-15 River Street, where lush blooms provide the backdrop for a Sunoco gas station. The mural is diagonally across the street from one of the 2019 murals, Victor Ash’s homage to American astronaut Mae Jemison, which take up the wall of the Radisson Hotel.

Just around the corner, on the other side of the Radisson, Vinie Graffiti has created a towering mural featuring one of her iconic characters. “Dancing Queen” is a celebration of New Rochelle’s connection to the performing arts.  Graffiti is a French street artist, originally from Toulouse, who started painting graffiti in high school. Her early work focused on lettering, but after moving to Paris in 2007 Graffiti started exhibiting a feminine character with a distinctive hairstyle made of “tags”, “flops” and dedications. But don’t expect to find any hidden messages in this mural: For New Rochelle Graffiti says the Dancing Queen’s hairstyle is studded with “vegetation and bijoux (jewels).”  (See more of Vinie’s work on Instagram: @viniegraffiti)

Bringing It Home: People and Places

For a set of murals along the pedestrian walkway at the new Modera building (111 Centre Avenue)  with the theme “People and Places” SAM chose the Spanish artist Cristian Blanxer to capture the faces of some local residents. The murals were funded independently by the building developer, and Audrey Decker says the idea was to “celebrate the community’s diversity by representing people you see in New Rochelle every day.” SAM worked with NRCA to identify and contact potential subjects, who include restaurateur Alvin Clayton, who came to the U.S. from Trinidad; dancer Monica Deane, who celebrates her Lebanese heritage; fire fighter Mike Cascio, born and raised in New Rochelle; Patricia Fuenmayor, A Univsion News anchor who makes her home in New Rochelle, and Michael Hilderbrand, the beloved Principal of Trinity School.

Blanxer is a Spanish street artist from Barcelona with a degree in Fine Arts whose “multi-story” surrealistic portraits feature spontaneous brushstrokes and intense color. )See more of his work on Instagram at  @cristianblanxer).

The #NRNYMurals are linked by a free, downloadable app, “Behind the Wall”, that combines augmented reality content and audio-guide features, making the murals truly interactive. The #NRNYMurals join SAM’s murals in New York City, Larchmont and Mamaroneck, forming together a continuous street art belt starting at Grand Central and continuing along the Sound Shore.  The free app can be downloaded from http://streetartmankind.org/NRNY

Street Art for Mankind (SAM) is a 501(c)(3), non-profit organization working with prominent street artists to create large murals all around the world. Its goal is to raise awareness on social justice and environmental issues, and to give the public the means to become actors of change. SAM is recognized for its mural series with the United Nations, the Department of State, but also for its Art Walk Murals with Cities across the world to bond communities together, create a sense of belonging and increase foot traffic. Learn more at StreetArtMankind.org.

About the New Rochelle IDA

The NRNY collection of this year’s murals are sponsored by the New Rochelle Industrial Development Agency, the public entity whose mission is to provide financial assistance through tax incentives to eligible projects in order to promote economic vitality and prosperity as well as recreational opportunities for the entire New Rochelle community. Commenced six years ago, the City’s bold redevelopment initiative – spearheaded by the Department of Development in conjunction with the New Rochelle IDA – has already helped attract $2.2 billion in private investment that has approved 9.2 million square feet of space downtown. The sweeping re-envisioning of the downtown area has also generated 3,600 new units of mixed-income housing, new jobs for local residents, and large numbers of contracting opportunities for area businesses and enhanced arts and cultural programming.

About the New Rochelle Council on the Arts:

The New Rochelle Council on the Arts (NRCA) was created in 1975 by the New Rochelle City Council to stimulate and encourage the study and presentation of the performing and fine arts; in 2005 NRCA became a 501 (C) (3) organization. For more than 47 years NRCA has worked to fulfill its mission by sponsoring art exhibitions, public art, theatrical productions, dance recitals, film screenings, lectures, and concert series. NRCA programs are made possible by support from the City of New Rochelle and ArtsWestchester, as well grants from foundations and individuals, sponsorships from local businesses and donations from NRCA members and the public. The two murals by Carlos Alberto and the Mural Fest were made possible with funds from the ReStart the Arts, a regrant program of ArtsWestchester with support from the Office of the Governor, the New York State Legislature and the New York State Council on the Arts.