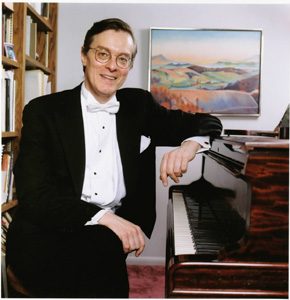 Peter Serkin is one of the handful of pianists who not only possess a cerebral understanding of the music of our time but the ability to communicate it with feeling. In his hands, even the most formidable works are fluid and expressive.

Peter Serkin holds a singular place among today’s classical music artists, admired equally for his performance of established repertoire and as a consummate interpreter of contemporary music. He has performed with the world’s major symphony orchestras, led by such eminent conductors as Seiji Ozawa, Daniel Barenboim, Simon Rattle, Herbert Blomstedt, Claudio Abbado, and others. He is equally accomplished as a chamber musician both in his collaborations and as a founding member of the TASHI Quartet, with violinist Ida Kavafian, cellist Fred Sherry, and clarinetist Richard Stoltzman.

He presents a program which explores Mozart’s later piano works with Bach’s Goldberg Variations as its centerpiece, and is followed by an Artist Reception.