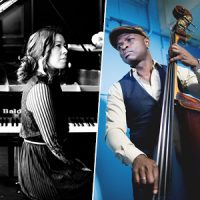 Miki Hayama, born in Kyoto, Japan is a Grammy Award-nominated jazz pianist, arranger and musical director who lives in New York City.  She was the first winner of the Yokohama Jazz Competition and has performed and shared the stage with many greats, including Kenny Garrett, Ralph Peterson, Sean Jones, Vincent Herring, Roy Hargrove and Greg Osby. Her third studio album, Wide Angle, was awarded Swing Journal‘s Gold Disc Award in March 2009. Most recently, Hayama worked as a musical director, arranger and keyboardist on Nnenna Freelon’s studio album Time Traveler, which was nominated for a Grammy in the category of Best Jazz Vocal Album.

Bassist Richie Goods, one of the most versatile and accomplished bass players on the scene today, is the youngest person ever inducted into the Pittsburgh Jazz Hall of Fame. He came to prominence while touring and recording with the late Mulgrew Miller, whom he credits for much of his success. Goods went on to make a name for himself through recording and touring with a variety of jazz and popular artists, including Sting, The Headhunters, Louis Hayes and the Cannonball Adderley Legacy Band, Lenny White, Milt Jackson, Whitney Houston, and Christina Aguilera. His lengthy discography also includes Grammy Award-winning and platinum albums by Alicia Keys and Common.