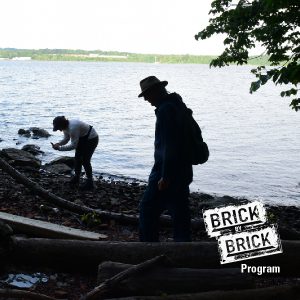 Come listen to the region’s leading brick hunters and collectors as they tell stories of discovery and adventure along the Hudson River. Audience members are encouraged to bring their own “brick stories” and marked bricks (up to seven per person) to share and swap. An event for those who love New York State history, genealogy, archaeology, collecting, folklore and, of course, bricks. Featuring Julia Whitney Barnes, Dr. Allan Gilbert, Stephanie LaRose Lewison, Fred Rieck, and Rob Yasinsac. Part of ArtsWestchester’s Brick by Brick exhibition.

Julia Whitney Barnes – Julia Whitney Barnes is a multi-disciplinary artist with specialties in oil paints, ceramics, drawing, etching and site-specific installations. Whitney Barnes’ work has been featured in The New York Times, Brooklyn Magazine, The Village Voice Hyperallergic and The New York Sun. After decades in NYC, she moved to the Hudson Valley, where she lives with her photographer husband and young daughter. While working on a series of paintings and drawings entitled “Bricks and Stones May Break,” she began collecting bricks from destroyed buildings and defunct brickyards as reference images. She noticed the variety in their ‘stamps,’ and discovered bricks that were made from Hudson River clay. Intrigued that their source was so close to the City, she began seeking out and exploring defunct brickyards along the River – and found more than she expected.

Allan Gilbert – Allan Gilbert has a Ph.D. in Anthropology from Columbia University and has taught at Fordham University in the Bronx since 1983. An archaeologist by training, he directed excavations at the Rose Hill Manor site on the Fordham’s campus for 17 years (1985-2002). He has also been collecting and studying bricks since the 1980s in order to learn about the trade of historic building materials in colonial and early American New York. His new book, Digging the Bronx: Recent Archeology in the Borough, has just been published by the Bronx County Historical Society and illustrates, through case studies, the different ways in which archaeology is being applied to sites and historical questions within the borough, as well as how urban archaeologists are meeting the modern challenges of excavation, preservation and education within the city.

Stephanie LaRose Lewison – Stephanie LaRose Lewison was born and raised in the Mid-Hudson River Valley. Always a collector, she studied geology in college and therefore found herself collecting rocks, minerals and fossils. Surprisingly, this would not be her heaviest collection. While working for an environmental consulting company, she was directing test pits of a demolished building near Fordham University. Numerous bricks were coming up in the excavator bucket. When she noticed that some had different imprints, she set them aside. As fate would have it, Allan Gilbert, a Fordham University professor of anthropology who, in part, studies the composition of bricks so as to determine their origin, came to the project site and noticed Lewison’s pile of bricks. He told her some of the history of brickmaking in the area and she was hooked! Lewison began to notice bricks everywhere. Her collection grew from just a few bricks in 2008 to more than 450 bricks by 2018. These bricks are interesting to her because they represent a relatively recent, but also relatively unknown, history of the region – hundreds of brick manufacturing companies formed and then folded. These bricks tie Lewison’s passion of geology with her interest in local history and, of course, her aptitude for collecting. Most of her collection consists of bricks that were manufactured and/or found in the Hudson River Valley; however, through the International Brick Collector’s Association, she has also traded for bricks that were manufactured around the United States.

Fred Rieck – Fred Rieck has been a lifelong resident of Elizaville, NY.  At an early age, he developed a philosophy that food is meant to be played with and toys were meant to be taken apart and then fixed. He took an early interest in odd structures and unusual machinery. Marked brick became another curiosity. He earned a degree in Electronic Technology at Dutchess Community College. Believing he needed work experience to continue his career, he enlisted in the U.S. Navy and enrolled in the longest-running tech school offered by Naval Aviation. It was this smorgasbord of technological disciplines and experience that qualified Rieck for a position with the State of New York’s Inspection Services Bureau, where he worked for over 25 years. The position took him to almost every corner of the State, but it was on one assignment tour during which Rieck developed an interest in brick collecting. He later joined the International Brick Collectors Association. Fred has worked extensively with brick enthusiast Don Bailey on developing the brickcollecting.com website. It was on this very site that Rieck met Andy van der Poel, a dedicated brick collector with a penchant for researching brick trademarks, manufacturers and yard sites. The two have subsequently been out on many adventures in search of brick and history.

Rob Yasinsac – Rob Yasinsac is co-author, with Thomas Rinaldi, of Hudson Valley Ruins: Forgotten Landmarks of an American Landscape, and author of Briarcliff Lodge (Images of America). He collects bricks from demolished buildings and abandoned locations that he photographs. The New York State Museum included a display of bricks from his collection, called “40 Hudson River Bricks,” in its 2016-17 Hudson Valley Ruins exhibition. A Westchester County resident, Rob has photographed ruins and endangered architecture for nearly 25 years, having first documented forgotten and neglected buildings for photography class at Irvington High School.