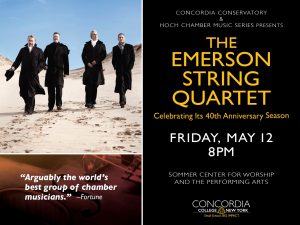 The Emerson String Quartet has amassed an unparalleled list of achievements over four decades: more than thirty acclaimed recordings, nine Grammys® (including two for Best Classical Album), three Gramophone Awards, the Avery Fisher Prize, Musical America’s “Ensemble of the Year” and collaborations with many of the greatest artists of our time.

The 2016-17 season marks the Emerson Quartet’s 40th Anniversary, and highlights of this milestone year reflect all aspects of the Quartet’s venerable artistry with high-profile projects and collaborations, commissions and recordings. Universal Music Group has reissued their entire Deutsche Grammophon discography in a 52-CD boxed set. After recent engagements together at the Kennedy Center and Tanglewood, illustrious soprano Renée Fleming joins the Emerson at Walt Disney Concert Hall, performing works by Alban Berg and Egon Wellesz from their first collaborative recording, released by Decca in fall of 2015. The Chamber Music Society of Lincoln Center has programmed celebratory concerts at Alice Tully Hall, as well as in Chicago and Purchase, NY, in October: the Calidore Quartet teams up with the Emerson for the Mendelssohn Octet, and the Emerson gives the New York premiere of Mark-Anthony Turnage’s Shroud (co-commissioned by CMS). Former Emerson cellist David Finckel appears as a special guest for Schubert’s Quintet in C Major. In May 2017, legendary pianist Maurizio Pollini will join the Quartet for a performance of the Brahms Quintet at Carnegie Hall. Additional highlights include a concert with clarinetist David Shifrin as part of the Quartet’s season-long residency at Chamber Music Northwest in Portland, Oregon, as well as a collaboration with cellist Clive Greensmith for the Schubert Quintet at the Soka Performing Arts Center in California. The Emerson continues its series at the Smithsonian Institution in Washington, DC for its 38th season, and the quartet members have been selected as Artistic Advisors for Wolf Trap’s Chamber Music at The Barns in Virginia, curating the series in celebration of its 20th season.

Multiple tours of Europe comprise dates in Austria, Italy, Germany, Switzerland, Belgium, The Netherlands, Spain and the United Kingdom and the Quartet also visits Mexico for the Festival Internacional Cervantino.

Lawrence Dutton has served as the Artistic Director of the Hoch Chamber Music Series for 15 years, transforming the series into a world-class chamber music series with an eclectic mix of repertoire and artists.

There will be a pre-concert lecture, More Than Music, at 7 pm in Stein Hall prior to the concert with Conservatory faculty with a detailed study of the chamber music featured on the concert.

For information, call the Concordia Conservatory office at (914) 395-4507 or order tickets online at www.concordiaconservatory.org.