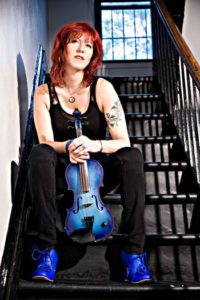 On Friday, November 15th, Deni Bonet comes as a new musical artist to the BWC Coffeehouse/ Songwriter’s Listening Room.  She is a NYC based pop/rock singer/songwriter and a classically trained violinist.  She began her career at the NPR radio show, Mountain Stage, where she both sang and played her own compositions as well as accompanied show guests.  She left with a mission to show that violinists could play more than concertos and hoedowns.  Her high energy performances have brought her to Carnagie Hall, the United Nations, the Great Wall of China and the White House.  She has been featured on HBO, NBC and several film and dance projects.  She’s been described as “Sheryl Crow meets the B-52s.”  Doors open at 7 pm for 8 pm performance. Tickets are very low price of $10 and include light snacks/beverages or BYO.  For more information call 914-337-3252 or check the website theBronxvilleWomensClubinc.org