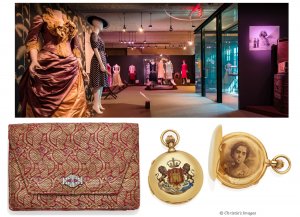 Newly Discovered Treasures to be Featured In Lyndhurst Couture Exhibition

Tarrytown, NY—May 23, 2017–When Lyndhurst mounted the couture exhibit Defying Labels: New Roles, New Clothes, last year, the exhibit curators never imagined they’d discover new items in private hands that would form the basis of this year’s restaging. These include a special commission pocket watch from Tiffany’s made in 1895, a ruby and diamond clutch from the roaring twenties and a rare coat from the turn of the century made by the French couturier Pingat.

The exhibition tells the story of the revolutionary changes in women’s roles from 1880s to 1940 as reflected in the clothes of Helen Gould, Edith Kingdon Gould and Anna Gould, Duchess of Talleyrand, each a relative of railroad baron Jay Gould. This second staging of the exhibit offers new elements for return visitors and a final chance for visitors who missed the original run.

“We’ve extended this exhibition because it was so resonant with our visitors last season and many who wanted to see it, missed the opportunity. These clothes viscerally displayed the distinct personalities of these three women, a philanthropist an actress and a Duchess, and highlighted the issues they confronted in their time. In many ways, these are still the issues women confront today,” said Executive Director Howard Zar.

Upon hearing of last year’s acclaimed exhibit, a local resident revealed that in the 1970’s, he had bought pieces from Helen Gould’s wardrobes at a tag sale held on the Lyndhurst lawn. At that point, few museums collected or exhibited couture and the Gould wardrobe pieces were seen as old clothes to be cleared out at a bargain sale.  Luckily, very few pieces sold, leaving the bulk of the couture collection at Lyndhurst. However, one savvy local resident, who was only in high school at the time, recognized the historical value of these couture items.  He retained them through the years, later becoming a vintage clothing dealer, and will loan pieces to Lyndhurst for the special restaging of the exhibit.

The second fateful discovery was a collection of items owned by Anna Gould which were auctioned as a part of her granddaughter’s estate at Christie’s.  Lyndhurst’s executive director only discovered the sale a week before it was to be held in Paris. Acting quickly, Lyndhurst was able to solicit generous donations to purchase items that related directly to Anna Gould’s life as the wife of two French aristocrats.

These rare finds include a Tiffany watch that Anna commissioned in 1895 as a wedding gift to her first husband, Count Boniface de Castellane, with engravings of his coat of arms and her bridal portrait. Also acquired was a sparkling ‘Roaring Twenties’ red and gold silk evening bag with a diamond and ruby clasp, as well as gold cufflinks featuring enameled portraits of Anna’s children with her second husband, the Duke of Talleyrand.

These items will become part of the remounted exhibition, which also includes new examples from the wardrobes of these three Gould descendants. With a focus on daywear, the full exhibition highlights the development of the design attitudes and vocabulary that are direct precursors to modern dressing. The stunning collection of gowns, dresses, sports wear and accessories includes more than 30 ensembles – from flouncy and feminine to sleek and modern. Hallmark luxury brand names like Tiffany, Faberge, Cartier, Worth and Louis Vuitton, among others are included.

The exhibit is on view from June 15th through September 24th and can be seen at the conclusion of historic tours of the mansion. Tickets are $16 for adults and tours are offered Thursdays through Mondays, 10 am to 4 pm. Admission to the exhibit is $10 as a stand-alone ticket. Tickets can be purchased online at www.lyndhurst.org.

The mansion at 635 South Broadway is easily accessible from the Metro North.

Go to http://www.lyndhurst.org for more information.