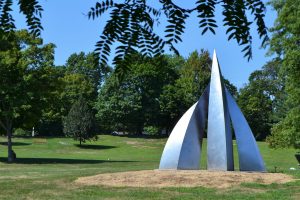 Since August 2016, Cope, by artist Damien Vera, has delighted visitors of Rye Town Park. Until recently, the sculpture had been on loan from the Art Students League of New York as part of The Rye Arts Center’s Public Art Initiative. With the approval of The Rye Town Park Commission, The Rye Arts Center has purchased the sculpture so that it can remain in the park permanently.

“Cope is a wonderful addition to Rye Town Park,” says President of the Rye Town Park Commission, Gary Zuckerman. “It adds another dimension to the concept of enhancing the passive uses of the Park. Placing artistic endeavors within its natural beauty further adds to Rye Town Park’s symmetry and elegance.”

The sculpture was first installed in Manhattan’s Riverside Park along the Hudson in 2012. It is 14’ tall and is comprised of five curved steel towers. The outward-facing sides of each are made of stainless steel. The inward-facing sides consist of a more harsh and industrial steel. Hidden within each structure is a sculpture of a human figure, visible through a small slit. The figures will only be seen by the most inquisitive of viewers. “I want it to be for curiosity,” explains Vera who wanted to create an environment with which the viewer could interact.

Cast against the beach-side park, some see the structures as sails or fins, while others see a shining claw breaking through the earth. The artist encourages viewers to use their imagination and find their own interpretation.

“This was an opportunity we couldn’t pass up,” says Meg Rodriguez, Executive Director of The Rye Arts Center. “We’ve received an overwhelmingly positive response for the piece and were given the chance to purchase it for a fraction of its value.”

Patrons of The Rye Arts Center, Gail and Ted Roman and The Wallace Fox Foundation, donated the funds to purchase and maintain the sculpture. “As a permanent installation in Rye Town Park,” shares Gail, “Cope is a wonderful manifestation of The Rye Arts Center’s mission to inspire everyone’s interest in art that is ‘characterized by artistic tradition, educational value, and a spirit of innovation.”