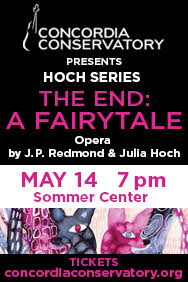 THE WORLD PREMIERE OF CHAMBER OPERA  “THE END: A FAIRYTALE”

Bronxville, NY – The Hoch Chamber Music Series at Concordia Conservatory concludes its 2021-22 season with a world premiere opera, The End: A Fairytale.  This one-act chamber opera with orchestra is written and composed by JP Redmond and Julia Hoch and will be performed for the first time, on Saturday, May 14 at the Sommer Center, Bronxville. The opera is led by music director and conductor James Lowe.

The cast includes Helen Zhibing Huang as the Heroine, Sun Young Chang as Anna, Eliza Bonet in the roles of the Bride & Wedding Guest, Christian Sebek as Miller & the Sidekick, George Heath as Joseph and Erik Tofte in the role of the Villian.

The opera story is based on a Grimm’s Fairytale.  There are stories that cry out to be told: to celebrate, to condemn, to connect.  Anna and Joseph have just such a story to tell…if only this time they can get it right, finally.  Inspired by the oral tradition of fairytales and the archetypes they explore, The End: A Fairytale, brings to life a retelling of The Grimm Brothers’, “The Robber Bridegroom.”

About the opera composer and librettist

Composer and keyboard player, J.P. Redmond was born in California in 1999 and grew up in Yonkers, New York. He is currently pursuing a Master of Music degree at The Juilliard School, where he completed his undergraduate degree in 2021, studying with Matthias Pintscher and formerly with Christopher Rouse.  Currently, J.P.’s musical pursuits include composing and producing for contemporary, film, and multimedia works, collaborating with other artists as an arranger, and performing on keyboard in a variety of genres.

Recent projects include an orchestra piece for the Juilliard Orchestra, which was premiered in February 2020 with Maestro Jeffrey Milarsky, a choral work for The New York Virtuoso Singers and conductor Harold Rosenbaum, an opera scene with playwright Matthew Capodicasa for Juilliard’s OperaComp program, a wind nonet for Imani Winds and the Kenari Saxophone Quartet commissioned by and premiered at Chamber Music Northwest, and several chamber and solo works for friends and colleagues.

Julia Hoch is a storyteller creating new work as a writer and director across the mediums of theater, opera, creative writing, and video. Her work has taken her around the county, and she currently has works in development on both coasts. Julia founded Hyacinth Productions, a company focused on artistic collaboration and conversation across disciplines. She is a proud alumna of Williams College and The National Theater Institute at The Eugene O’Neill Theater Center.

Julia created and directed the recurring series “The Salon,” [Out]/Take/[Out], and A Day’s Work with Hyacinth Productions. Other New York directing credits include: L’Histoire Du Soldat (by Stravinsky and Ramuz), What Does She See?, A Night for Josh, And Friends!, and The Guardian.

Julia’s creative writing has been published in the book Everyone Is Asleep But Me, featuring her narrative poem “In The Middle of Night”, and the novella Wanted. She has several pieces in development, including a new play Vissi D’Arte and an as yet untitled novel.

Opera tickets are $44 for adults and $22 for seniors and children. To purchase tickets, visit: www.concordiaconservatory.org or call 914-395-4507.

Concordia Conservatory’s mission is to inspire, instruct, and enrich lives through music by offering excellence in education and performance.