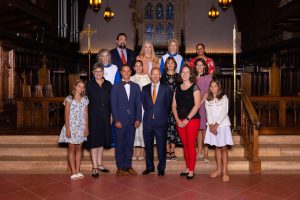 Formal Partnership with The Reformed Church of Bronxville

The new performance partnership includes the Conservatory’s HOCH Chamber Music Series, UNIQUE Series for Special Learners with Orchestra Lumos, and its Musical Adventures Family Series.  In addition, The Reformed Church will also be home to the Conservatory’s youth program performances which encompass over 75 honors recitals.  The concert series and youth program performances will be presented in Church’s Sanctuary and Edwards Room.

“This type of community partnership demonstrates the connections that are so needed in our society today and serves as a positive example for all others in our Village,” said Mayor Mary Marvin of Bronxville, New York.

“Our enthusiasm for this year’s partnership is tremendous and we are thrilled for the performance relationship between The Reformed Church of Bronxville and Concordia Conservatory in its inaugural year,”  said Conservatory donor and Church member Jim Hoch.

“As we start the 2022-23 season, we are pleased to have a new performance home for our Conservatory concert series and our youth program concerts, welcoming over 2,000 audience members to the performance space in The Reformed Church of Bronxville. We are truly thrilled with this cooperative relationship and look forward to its future in the years ahead,” said Executive Director Kathleen Suss.

“The Reformed Church of Bronxville is thrilled to partner with Concordia Conservatory this season and beyond. Music education has always been a central mission of the church and this partnership with Concordia is in direct alignment with that goal. We can’t wait to see all the ways in which this partnership will enrich both communities!“ Caitlin Dowling, Director of Music & Liturgy of The Reformed Church of Bronxville.

The Conservatory brings music to all people regardless of age, ability, ethnicity, or financial situation, and serves as a music education resource for Westchester and Fairfield Counties.

Staffed with a highly accomplished faculty of teaching and performing artists, offerings include private music instruction in all instruments, including voice, group and chamber music, music theory, ear-training, composition and songwriting, music and art therapy, musical theatre classes, an annual tuition-free holiday musical theatre production, early childhood music classes, summer camps, concert series, and an Honors Academy program.  Concordia Conservatory’s exemplary programs embrace vitality and the development of artistry at every age, phase, and level, and are dedicated to helping each student realize their full potential.  The diverse faculty of 40 and student population enrollment of 1,200 students of all ages represent over 20 countries.

About The Reformed Church of Bronxville

The Reformed Church of Bronxville was founded in 1850 in its present location, on a two-acre hill above the corner of Midland Avenue and Pondfield Road in the village of Bronxville. The original New England clapboard style building was replaced by the current structure in 1926. Today the Sanctuary, including the balcony, holds about 700 people. In recent years, RCB has grown from a Village-centered church to a thriving house of worship that draws visitors from throughout Westchester County and the entire tri-state area. While our congregation numbers around 900, The Reformed Church retains the intimate, small-town feel beloved by our members — a family of faith at the heart of the community.

The Music Department at the Reformed Church of Bronxville has a history of excellence. It boasts a newly restored/expanded 90 rank Austin Pipe Organ, Steinway pianos, and Whitechapel and Schulmerich handbells. The department currently has adult and youth handbell ensembles, children and youth choirs, a volunteer adult choir, Chancel Choir, and the professional RCB Schola and a concert series. The department reaches over 75 members from ages 4 – 94.