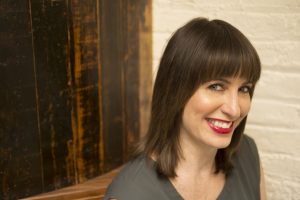 HASTINGS-ON HUDSON and TARRYTOWN, NY: Take an evening with Standup, Storyteller, Author and NPR Host Ophira Eisenberg. Then take a night with Pakistani-American Physicist and standup comedian, Saad Sarwana. Shove them in a particle accelerator and collide them at the speed of light. What do you get? We don’t know because it would kill them and open a black hole. But here’s the next best thing – how about an evening with both of them, making a crowd of comedy nerds and science geeks laugh, think, feel and have an otherwise amazing time. And cap it off with a discussion on the art (and science) of comedy (and science) hosted by improv veteran Ed Herbstman (The Big Sick, 2Some, Magnet Theater).

On Monday January 21st at 7:30 PM RiverArts, in association with Jazz Forum Arts, will present an evening of standup comedy and conversation. Ophira Eisenberg, host of NPR’s Ask Me Another, is the headliner, along with standup physicist Saad Sarwana, [Dobbs Ferry] one of the anchors of the Science Channel’s Outrageous Acts of Science. Following the two standup performances, actor/writer/director Ed Herbstman [Hastings] will host an in depth conversation with the two comics exploring the creative process behind creating a standup performance.

COMEDY! STORIES! SUPERCONDUCTORS!
An evening of Standup and Conversation with Ophira Eisenberg and Comedian/Physicist Saad Sarwana

Seating Limited. Tickets: $20 in advance; $25 at the door [if remaining]. riverarts.org/comedy

RiverArts Artist Conversation series examines the creative process and how creativity fuels artists’ works in various disciplines. Upcoming conversations include a panel of award winning  authors for young people on February 10 [Sheela Chari, Sayantani DasGupta, and Veera Hiranandani], and on March 24 The Ageless Artist, a panel of mature visual artists [Eleanor Goldstein, Rosalind Schneider and Arle Sklar-Weinstein]. Whenever possible an artist in the same discipline is the moderator/interviewer, which allows a more in depth exploration of the creative process.

Ophira Eisenberg is a comedian, writer, and host of NPR’s Ask Me Another where she has played silly games with Sir Patrick Stewart, Connie Britton, Roxanne Gay, Josh Groban, George Takei, Ethan Hawke, Julia Stiles, Big Freeda, Lewis Black, Jessica Walter and more. She has appeared on HBO’s Girls, Comedy Central, Gotham Live, The Late Late Show, The Today Show, and VH-1. Selected as New York Magazine’s Top 10 Comics that Funny People Find Funny, and featured in the New York Times as a skilled comedian and storyteller with a “bleakly stylish” sense of humor, Ophira’s debut memoir, Screw Everyone: Sleeping My Way to Monogamy was optioned for a feature film with Zucker Productions. She has also been featured numerous times on the award-winning radio show and #1 podcast, The Moth Radio Hour. Her recent comedy special Inside Joke is available on iTunes and Amazon.

Saad Sarwana also known as “The Standup Physicist” has been a comedian for 20+ years. He has performed in every major comedy club on the east coast. Saad will have you rolling in laughter as he breaks stereotypes while talking about Physics, racial profiling and being a Pakistani-Muslim living in the US. As a certified geek, Saad also hosts the Science Fiction and Fantasy Spelling Bee. As an academic Saad has over 50 peer reviewed papers and was just elected president of the US Committee on Superconductor Electronics. He can be seen on the Science Channel TV show Outrageous Acts of Science, which marks its 100th episode this year. Saad Sarwana lives in Dobbs Ferry, NY with his wife and kids.

Ed Herbstman grew up in the suburbs of Chicago and after graduating from Northwestern University, he began working at The Second City as a member of their National Touring Company. After following his girlfriend to New York, Ed became a Police Officer for 3 years, assigned to the 70th Precinct in Flatbush Brooklyn where he once arrested a gun-toting drug dealer for kidnapping a prostitute. Ed worked as a contributing writer on season two of HBOs Da Ali G Show. He was also head writer for the branded entertainment company, Dandelion, where he creating award-winning online content sponsored by brands such as P&G, Lincoln, Ford, Cadbury, Loreal, and Sun Life Financial. You can see some of his work at Dandelion.com. He has performed in numerous commercials including: Orbit Gum, FedEx, Chase, Net10 Wireless, Got Milk, Royal Caribbean, Kit Kat, GE, and Fuddruckers. In Hollywood, Ed has acted in The Big Sick (2017), Arthur (2011) and Alpha House (2013).

Celebrating and cultivating the arts in the Rivertowns for over half a century, RiverArts has been the catalyst that connects performers, musicians and art-makers with Rivertowns audiences. Motivated by a belief in the power of art to bring insight and delight, RiverArts delivers programs that have repeatedly brought us together, welcomed newcomers, and created experiences that strengthen our sense of community. The free, five-town Music Tour and Studio Tour expand our combined local and metro area audiences to 20,000.

RiverArts excels in music, art and dance education with professional instructors at affordable prices. The interpretive Artist Conversations take the public inside the creative process with award winning artists, writers, directors and musicians. Every month of the year, RiverArts brings our community, the arts, and creativity together. More details can be found at riverarts.org

Seating Limited. Tickets: $20 in advance; $25 at the door [if remaining] riverarts.org/comedy

Next post:
Three Authors Discuss How Identity and Community Inspire Their Writing »