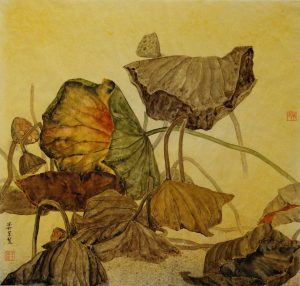 Several programs will accompany the exhibition:

Saturday, June 11 from 1-4pm, Artist’s Talk and reception, open to the public.

The Chinese painting tradition spans three thousand years and is the visual component of one of the world’s oldest and richest cultures.  Throughout history, Chinese paintings have transmitted the spirit of the landscape, expressed what was understood as human civility and virtue, and captured the transitory but magnificent beauty of nature.  China’s visual arts, particularly paintings and calligraphy, have always been intimately intertwined with the country’s sophisticated literary, philosophical, social, and historical traditions.

As Chinese painting continues to evolve in response to contemporary realities, few are better able to forge this path of development than Wang Mansheng.  Steeped deeply and broadly in China’s classical arts, Mansheng is also a global citizen fully engaged in today’s world.  His paintings at once speak to the concerns and sensibilities of viewers now, throughout the world, and are inspired by China’s vibrant past.

This exhibition juxtaposes the traditional and contemporary in multiple ways.  In pre-modern times, the concept of “cloud travel” (yunyou in Mandarin Chinese) was largely associated with the wanderings of sages and immortals.  In this way, yunyou paintings embodied notions of spirituality and aimlessness and were connected with Daoism, Buddhism, and folk beliefs.  Drawing on the contemporary use of the word “cloud” for online data storage, the term yunyou has now taken on a new connotation of travel through the internet.  In this exhibition, Wang Mansheng explores both meanings of yunyou and thereby, creates a dynamic and timely bridge between China’s past and our own day.

Wang Mansheng was born in Taiyuan in 1962 and started studying traditional painting and calligraphy, largely independently, from a young age.  After attaining a degree in Chinese classics from Fudan University in Shanghai, he directed and produced documentary programs at China Central Television. Wang moved to Dobbs Ferry in 1996 and turned his focus to calligraphy and painting. His influences include traditional Chinese literati art, Buddhist art, and, more recently, the Hudson Valley.  He uses non-traditional materials such as reeds from the Hudson River and homemade ink made from black walnuts. The artist’s works have been exhibited in China in Beijing, Shanghai and Shanxi province, as well as in the United States, including at the Brooklyn Museum, the Baltimore Museum of Art, the Huntington Art Museum, and Connecticut College.