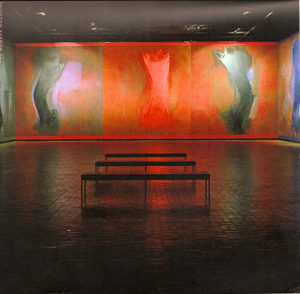 A monumental work of art that is exhibited every few years

The heroic space encompassed by these walls required a heroic subject.

(Purchase, New York…. August 16, 2019) ………………… Almost fifty years ago, American artist and abstract expressionist Cleve Gray was commissioned to create a site-specific painting for the inauguration of the Neuberger Museum of Art, Purchase College, SUNY, in 1974. Threnody (1972–73), the 280-foot long, 22-foot tall artwork, assembled in 28 panels, turned out to be an extraordinary project. It was a lament for the dead on both sides of the Vietnam War. At the time, college students across the country were demonstrating against the conflict in Vietnam, a war they felt to be unjust and inhumane. Gray, an active anti-war advocate himself, saw this as an opportunity to support the students and express his hope for humanity’s spiritual and emotional healing. The Museum’s location on a college campus compounded the significance.

Beginning September 25, Gray’s monumental artwork will once again be on view at the Neuberger Museum in its huge Theater Gallery. Threnody, which features 28 contiguous panels containing with vertical forms engaged in a “dance of death and life” will effectively convert the gallery into a cathedral.

“Threnody considers opposites—male and female, love and hate, conflict and peace,” notes Assistant Curator Avis Larson. “It continues to have an impact on viewers almost half a century after it was first exhibited. In many ways we are facing similar issues relating to war and the loss of innocent lives, in addition to the many other situations we have to confront here in the United States, such as gun violence.”

A “threnody” is a classical song of mourning, a lamentation. In 1975, when explaining the piece, Gray wrote: “I felt that tragedy had been manifested more intensely during those years and in the preceding decade than at any other time in American history. Iniquity, futile death and destruction surrounded us with little relief. This sense of tragedy in the sixties and seventies insisted itself upon me as the subject matter for the walls I had been asked to paint in the Neuberger Museum, for I felt that the heroic space encompassed by these walls required a heroic subject.”

Threnody marked a turning point in the artist’s investigation of a radically simplified, vertical image and the large-scale calligraphic gestures that became the hallmark of his mature paintings. To prepare, Gray created several-hundred color studies and over 100 figure studies over a period of about 18 months. About his approach to large-scale logistics, Gray wrote that he “had a 20’ x 20’ easel constructed…it had a hoist so that it could be raised to the vertical position.” In addition, he used very large brushes, sometimes janitors’ push brooms, and plastic swimming pools in which to mix his paints.

Rhythmically spaced motifs in the 28 panels suggest a diversity of imagery, and most vividly, perhaps, a procession of solemn dancers. “The depiction of tragedy often requires an element of hope, so I chose a positive red for the central figure of the ‘apse’ wall. Unexpectedly but inevitably this figure became the climactic point of the room. In the midst of death it had to offer the hope of life, just as blood is both the palpitating fluid of life and the fleeting evidence of death.”

Larson believes that the reinstallation of Threnody “impresses upon us the need for humanity’s spiritual and emotional healing as we now face the devastation of current wars and the loss of life on both sides. Threnody offers our students and the general public a place conducive to contemplation and meditation.”

Threnody is part of the Neuberger Museum’s permanent collection, and has been exhibited from time to time, most recently in 2013, 2007, and before then, shortly after 9/11.

Generous support for Cleve Gray’s Threnody: Forty Years is provided by the Friends of the Neuberger Museum of Art and Purchase College Foundation.