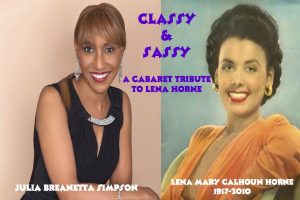 (Elmsford NY – September 28, 2017) – In celebration of the centennial of Lena Horne, Breanetta Productions proudly presents Julia Breanetta Simpson in Classy & Sassy – a cabaret tribute to the one and only Lena Horne for two performances, 5:00 p.m. & 7:30 p.m., on Saturday, October 28. This special event will be held at The Haven @ Lagond Music School, located at 9 Haven Street in Elmsford, NY 10523.

On line tickets are $20 at www.breanettaproductions.com
Tickets can also be purchased at the door for $25 (cash only).
For more information call 914.740.8226

Lena Horne was an iconic singer, dancer, actress, and activist who began her career at age 16 in the Cotton Club chorus line, appeared in such musical films as Stormy Weather and Cabin in the Sky, and lit up the Broadway stage in the Tony and Grammy Award-winning Lena Horne: The Lady and Her Music. Julia Breanetta Simpson’s “Classy & Sassy” is a fitting tribute to one of the greatest entertainers of our time. Ms. Simpson is joined by her trio led by the superbly talented Mario Sprouse with a special guest appearance by world-class woodwind player Charlie Lagond.

Julia Breanetta Simpson is known throughout the tristate area for her one woman shows including “Harlem on My Mind” and “How Sweet The Sound.” She has appeared around the country at Regional, Dinner and Stock Theatres in such productions as Ain’t Misbehavin’, Dreamgirls, For Colored Girls, One Mo’ Time, Purlie, Tintypes, and When The Nightingale Sings. She has appeared in various Off-Broadway Theatres and Cabaret venues in New York City.

Next post:
"SHOUT FOR JOY! A Christmas Concert to Make The Heart Sing »