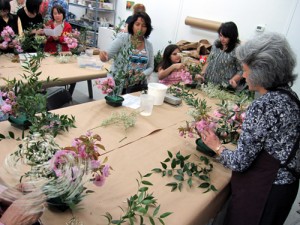 Free and open to all ages!

Cherry Blossom season returns to Pelham Art Center on Saturday, April 26, 2014 from 1:30- 3:30pm! Join us as we celebrate our third annual Cherry Blossom Festival (Sakura Matsuri) with free hands-on workshops and activities in the traditional arts of Japan as part of our Folk Arts Series.

Throughout the event participants can take part in two hands-on workshops. Artist Shoko Iwata and her two assistants, Jerry Gross and Vivien Huang Kwok, will lead a workshop in traditional Japanese floral art from the Sogetsu School of Ikebana. Running simultaneously, weaving artist Yukako Satone will instruct participants on how to weave a cherry blossom on a SAORI loom, a contemporary Japanese hand-weaving method. Participants will be able to take home their celebratory cherry blossom arrangements and woven flowers. At 2:30, IchiFuji-kai Dance Association will present a classical Japanese dance performance. Also called Nihon buyo or nichibu, it is a classical performing art that grew out of and is very similar to dance of the Kabuki theatre.

In keeping with the spirit of the day, visitors can contribute to a community “wish tree,” by writing messages of hope and adding them to our collection. PAC will then mail the wishes to a central repository of wishes from around the world, becoming part of a greater project organized by Yoko Ono. For more information visit http://imaginepeacetower.com/yoko-onos-wish-trees

Japan does not have an official flower, but sakura, or the cherry blossom, is most certainly its unofficial one. Its delicate beauty has captivated the Japanese for centuries and has long been a primary motif in Japanese art for both its aesthetic quality and its symbolism. The blossom of the cherry tree signifies the arrival of spring and is celebrated as a herald of hope and a bright future. Its small, pale petals are also associated with purity. But the flower’s delicate quality lends it a decidedly melancholy air, as well. After the cherry tree’s buds open, it’s just a few short days before the blooms have vanished entirely — the lovely petals all shed in a spectacular pink flurry. The blossom’s ephemeral beauty has become a poignant symbol of impermanence [in Japanese visual culture].

The Tradition of Hanami

In Japan, the seasonal blooming of cherry trees is a matter of enormous importance and is celebrated nationally in an event known as hanami (flower-viewing). Starting in late March, television weather reporters give the public daily blossom forecasts, tracking the “cherry blossom front” as it progresses from the south to the north. Families, coworkers, and groups of friends rely on these to quickly organize hanami parties as the cherry trees begin to bloom locally. Parks like Tokyo’s famous Ueno Park become crowded with picnickers, and rowdy nighttime revels take on a festival atmosphere. The practice of hanami is centuries old; it began sometime in the Nara period, during the 8th century, when it referred to the viewing of the ume, or plum tree. But by the Helan period (8th to 12th centuries), hanami was synonymous with sakura. The blossoming of the cherries was used to predict the next year’s harvest, and hanami was a time to perform rituals marking the start of the planting season. These rituals ended with a feast under the trees, much like the present day.

About the Ikebana Artists

For 45 years, Ikebana has been Shoko Iwata’s life, having been involved in the Sogetsu School of Ikebana since she was 16 years old. Iwata received her teaching certification from the Tokyo headquarters of The Sogetsu Foundation. She once taught at JAL when it was located on 53rd St & Fifth Ave and has since inherited her mother’s students in Westchester and has collected her own.

Iwata’s other love is supporting the YWCA of White Plains & Central Westchester.  Last October they hosted their 32nd Ikebana exhibition at their North Street – 515 North St., White Plains, NY building. Iwata supports their mission of “empowering women & ending racism” and has served on their board a few times. As a way to support the mission, Iwata teaches free Ikebana workshops to the women of the YWCA who reside at the N. Broadway residence, the lowest income housing in Westchester County.  In addition to teaching, Iwata has demonstrated Ikebana at the Hammond Museum, North Salem and the Brooklyn Heights Garden Club.  Most recently she exhibited at the Brooklyn Brewery with the “Gohan Society”, a fundraiser in March 2013 with Ikebana International NY members. Iwata belongs to the Sogetsu NY Branch & Ikebana International NY Chapter.

Jerry Gross has a professional background in floral design, specifically with silk flowers and has made trips often to China for its manufacture.

Vivien Huang Kwok has exhibited at the Metropolitan Museum of Art and has been studying Ikebana for over a decade.