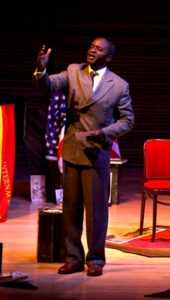 On September 4, 1949, violent riots broke out after Paul Robeson gave a concert near Peekskill, NY. This was triggered by hostile press and public reaction to remarks he had made in a speech in Paris earlier that year, in which he questioned the wisdom of African Americans fighting against the Soviet Union; and for his unflinching criticism of his country’s domestic and foreign policies.

The 70th anniversary of this seminal moment in modern American history is to be marked with a special performance of Call Mr. Robeson, a one-man play written and performed by British Nigerian playwright, actor and singer Tayo Aluko, who has been performing his play to great acclaim around the world for eleven years. On Sunday September 1, he will be performing it at the beautifully restored Dramatic Hall at Peekskill Central Market. He will be accompanied on piano by Dennis Nelson, accompanist for the New York City Labor Chorus.

Aluko, who has performed it in venues as varied as New York’s Carnegie Hall and village halls in England and Wales, said, “It might be difficult to imagine that what happened in Charlottesville two years ago could be totally forgotten in another fifty years. However, this is exactly what happened with Robeson’s Peekskill story, which I would argue is as significant and seminal an event as Charlottesville. I firmly believe that such stories from the past need to be retold often in order to help us deal with contemporary problems.”