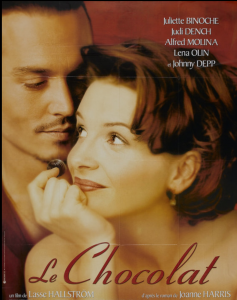 Chocolat and Comedy (both good for the heart!) are top features

(Bedford, NY… December 31, 2021)…  Highlighting some of their exciting and varied programming in February, Bedford Playhouse has announced it will feature “Skirmish of the Sexes Comedy Night” starring four comedians talking about relationships and other wonders; and the film screening of award-winning Chocolat, which will be paired by…what else?… a chocolate tasting served by Mast Brothers, makers of artisan chocolate.

“Mask up and come in. We’re open!” says Michael Hoagland, executive director of Bedford Playhouse, who also notes that the Playhouse Café will be serving small bites and heartier fare from now on.

Moody McCarthy is a stand-up comedian who has performed on Jimmy Kimmel Live, Conan, and the Letterman shows and can be heard on SiriusXM.  He’s also been featured on America’s Got Talent and Last Comic Standing, but gets asked more about his “House Hunters” episode. Moody’s material is described as original but universal, and smart without being trite.  Couple that with a disarming stage presence and in-the-moment chops, you’ll see why he’s earned the admiration of his peers for his ability to “go up cold”.

Kerri Louise is high-energy, commanding and versatile- but enough about her sex life. Kerri Louise can entertain any audience with her warmth and razor-edge wit. She was a regular correspondent on the Oprah Winfrey Show, and the Women’s Entertainment Network made her the star of their new reality show called “TWO FUNNY.” Kerri’s guest appearances include Nick Mom Night Out, Comics Unleashed, the Montel Show, The Fine Living Channel, Access Hollywood, The Apprentice, The View, Comedy Central, VH1, 20/20 and New Joke City.

Adrienne Iapalucci’s skewed look on life is reflected in her unique brand of intelligent comedy. Her dark sense of humor is enhanced by her political incorrectness and counteracted by her love of dogs. Comedy fans might recognize Adrienne from her performances as a semifinalist on season 7 of NBC’s Last Comic Standing and her appearance on the Late Show with David Letterman. Adrienne has been featured in the Daily News, New York Times, Reader’s Digest, and TimeOut NY magazine.

Stand-up comedian Shaun Eli has rightfully been called one of America’s smartest comics. He’s headlined comedy shows on five continents. Whether it’s a story about dining with a vegetarian or successfully fighting a parking ticket, this master storyteller proves that there’s hilarity in the ordinary if you approach life with a comedic warp. Job interviews? Serving on a NYC criminal jury? How about the Ten Commandments? For just about anything he’s experienced Shaun has a hilarious story at the ready.

“Chocolat” paired with a chocolate tasting with Mast Brothers

A sweet evening is in store for you. In “Chocolat,” a French woman and her young daughter open up a chocolate shop in a small remote village and proceed to shake up the rigid morality of the community. Vianne’s ability to perceive her customers’ desires and satisfy them with just the right confection, coaxes the villagers to abandon themselves to temptation — just as Lent begins. According to Newsweek: “The movie disarms you with its charm and its solid craftsmanship. The taste is sweet, the texture is as light as a souffle.” This charming and witty parable received five Academy Award nominations, including Best Picture. Juliette Binoche (Vianne Rocher) won the European Film Award for Best Actress, and Judy Dench captured the Screen Actors Guild Award (2001).

Also on the calendar in February:

Listen to the Movie with Rob Cavenagh

Trivia Night returns to the Bedford Playhouse Cafe, hosted by Kristen and Rachel from Rock Paper Scissors Custom Events. Play solo or as a team and test your knowledge on a wide range.

In this classic from 1967, an open-minded couple’s (Spencer Tracy and Katharine Hepburn) attitudes are challenged when their daughter introduces them to her Black fiancé (Sidney Poitier). Directed by Stanley Kramer.

For a complete calendar of events and tickets, please visit www.bedfordplayhouse.org