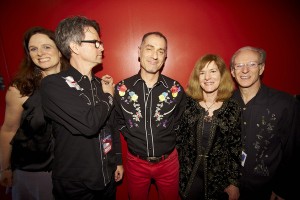 People passing through the courtyard at New Roc City are in for a pleasant surprise around 4 pm on Saturday, April 9th as Angels in the Chamber performs a free concert – another one of the New Rochelle Council on the Arts (NRCA) “Arts Encounters”. Angels in the Chamber includes Garry Novikoff (guitar, piano, vocals), Pamela Sklar (flute), Enid Blount Press (clarinet and bass clarinet) and Marc Wager (French horn) performing folk and jazz influenced music they call “chamber rock.” Drawing on influences that include Pink Floyd, Tori Amos, Philip Glass and Captain Beefheart, they blend elements of rock, pop, classical, atmospheric and improvisational music into a highly original genre all its own. The group plans to play from 4 to 5:30 pm in the plaza outside Regal Cinema.

NRCA inaugurated its series of monthly Arts Encounters — pop-up performances  in public spaces —  last year and will continue throughout 2016 (the British a cappella group Out of the Blue kicked off the season with a live performance at the New Rochelle train station during the morning rush on March 15th.) “The idea is to remind everybody how the arts enrich our daily lives with a series of  unexpected pop up performances in public spaces that  bring art to people where they live,” explains NRCA President Theresa Kump Leghorn. Last year’s Arts Encounters included live music at the Metro North train station, a Shakespeare Sonnet Slam at Starbucks in Wykagyl, live dance performances every week at the Grand Market on Library Green, “Living Room Theater” on Memorial Plaza, and interactive screen printing on Library Green.

Angels In The Chamber makes music that is unlike anything else under the heavens. In April of 2014 the Angels competed as finalists in the WNYC Battle of the Boroughs concert at the Greene Space hosted by WQXR DJ Terrance McNight.

The New Rochelle Council on the Arts was created by the New Rochelle City Council in 1975 to stimulate and encourage the study and presentation of the performing and fine arts; for 40 years NRCA has worked to fulfill that mission by sponsoring art exhibitions, theatrical productions, dance recitals, film screenings, lectures, and concert series. In addition, NRCA has sponsored public art — like the popular Fleur-de-Lis sculptures downtown — and created ArtsFest, while helping to build relationships between the arts, the business community and city government. The NRCA website www.newrochellearts.org has become major resource for artists and art lovers – the “go-to” place for information about the arts. Membership in NRCA is open to artists and non-artists alike, with members receiving special discounts and invitations to networking events and studio tours. For more information visit NRCA on the web at www.newrochellearts.org.   NRCA’s programs are made possible, in part, by ArtsWestchester with funds from Westchester County Government, the City of New Rochelle, and the support and participation of NRCA’s  membership.