«Back to all Arts Deals 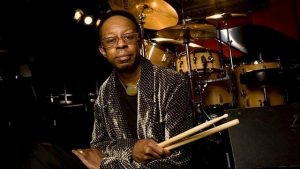 For over six decades, Louis Hayes has been a force in jazz drumming, anchoring groups for Oscar Peterson, Cannonball Adderley, Horace Silver, John Coltrane and Sonny Rollins to name just a few of his collaborators.

He’s also led his own celebrated bands and ranks alongside the illustrious Art Blakey as a swinging hard bop stylist. He’s played on over 600 recordings and he’s celebrating his new album, Crisis, which The Guardian gave four stars.

Disclaimer: The 2 for 1 is an exclusive offer to JazzForum Arts email subscribers. Offer only applies to Friday, April 1  & Saturday, April 2 9:00 PM shows. Only valid for online purchases after Wednesday, March30 @ 9:00 AM.