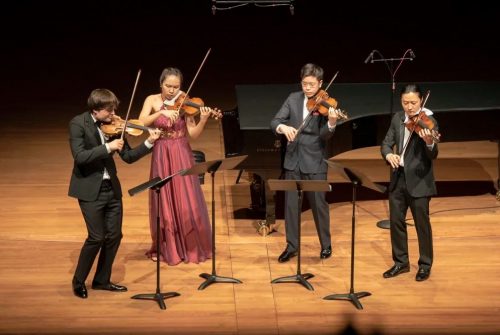 Since the start of the COVID-19 pandemic, Friends of Music Concerts, like all performing groups, had to pause its live concert plans. In the fall, they reached an agreement with Chamber Music Society of Lincoln Center (CMS) to provide its audiences with limited-run streams of some of CMS’s concerts, which feature internationally recognized chamber music performers.

According to Chamber Music Society of Lincoln Center, here is why each of the compositions being performed are noteworthy:

Baroque concertos usually included basso continuo, an accompaniment that provides the harmonies of the piece, but Telemann wrote about 80 pieces without continuo, including this one. The exact occasion and the reason for this particular instrumentation is unknown. The four movements, arranged slow-fast-slow-fast, capture Telemann’s charm, grace and wit with warm harmonies and clever imitation.

Violin Sonata was essentially Strauss’s last word on abstract instrumental music [before shifting his focus to big, programmatic music]…It came at a pivotal time when Strauss was synthesizing all these influences. The two outer movements are impassioned pleas, full of rapid modulations and high flying melodies, while the middle movement is a spontaneous-sounding reflection.

With its goal of promoting new French concert music, the Société Nationale de Musique in Paris, of which Fauré was a founder, gave a platform for him and his fellow members to focus on the previously-overlooked genre of chamber music from a French lens and promote it as part of Parisian cultural life. Fauré had a number of premieres at Société concerts, including this work, his first piano quartet…The standard line-up of movements—sonata, scherzo, slow movement, and energetic finale—is enhanced with modal twinges, colorful melodies, light textures and distinctive rhythms… With this piece…he finds his mature voice in the genre—a perfect marriage of rigorous form and French style.