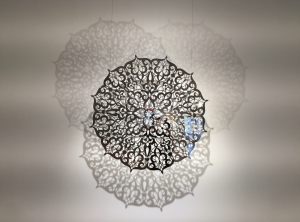 Traditions are instilled at an early age. Some revolve around holidays, objects, places or religions; some connect to specific people. They can be generational, cultural or global in their origin, and can have large societal impact. Katonah Museum of Art (KMA)’s current exhibition, Tradition Interrupted, features 12 artists from all over the world who reclaim ancient customs for the contemporary world by using a wide range of mediums such as mosaics, metalwork, ceramics and more.

While their art is visually different, the artists all create work that centers around large topics – culture, globalization and religion – as well as the traditions attached to those themes. The traveling exhibition, which was organized by Bedford Gallery in Walnut Creek, CA, features works that have recognizable elements, such as skateboards, Coca-Cola cans, and ramen noodle containers. However, these everyday objects are re-imagined in visually enticing ways that shift the perspective of these commonalities.

According to KMA’s associate curator of exhibitions and programs, Emily Handlin: “The displayed works are really approachable, bright and interesting to look at. It’s a really great balance and mix of the familiar and the challenging.”

When artists re-purpose objects that are familiar to the larger population, people can’t help but see these things in a completely different light. Upon seeing a ramen noodle container at the grocery store, most people don’t necessarily think about take-out culture, the environmental consequences of quick-fix meals, or globalization. However, when seeing it within a stand-alone work of art, one may begin to think more deeply about the meaning of this product in a different context.

In her “Disposable” series, artist Ana Gómez intends to show the displacement of ‘local’ by ‘global,’ demonstrating issues like consumerism. Similarly, Shirin Hosseinvand merges an unmistakable global brand, a Coca-Cola can, with ancient Iranian mosaic mirror work in order to emphasize the concept of mass production.

By reclaiming hybrid pieces of discarded heirlooms, Jaydan Moore reconsiders the ways in which people define themselves and others through objects. He highlights the ecological impact of the human desire to collect, commodify and own. By linking objects to memory, he focuses on tradition in a way that is specifically linked to tangible things rather than abstract concepts.

Faig Ahmed is also creating work about identity with his reinterpretation of Middle Eastern rugs. These handmade woolen rugs appear to be melting, symbolic of identity loss and change. Says Ahmed: “What mainly interests me are the old traditions and cultures, standard canons and stereotypes, which I end up breaking.”

In concert with Tradition Interrupted, KMA presents Remy Jungerman: Higher Ground. Jungerman is a Suriname-born Dutch artist working between New York and Amsterdam. By using geometric abstraction, he draws connections between this classic style and the patterns/symbols in Surinamese Maroon culture.

Both exhibitions explore issues of globalization and colonialism, expanding and defying established art-historical principles. They use history to inform people of the issues that these artists feel connected to.

Says Handlin: “A lot of the represented cultures are ones that people don’t normally have much exposure to, and this is a great introduction to the contemporary art from these places.”

The exhibition features pieces that are relatable, informative and absorbing. The featured artists carefully considered the paradox between the ordinary and unconventional. As a result, the viewer feels nostalgic, yet curious in this space.

Both exhibitions remain on view through September 25.