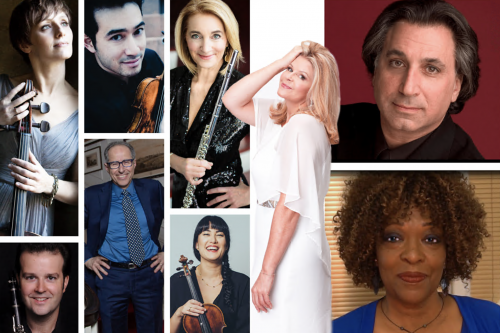 When Grammy Award-winning composer Richard Danielpour told long-time collaborator Michael Boriskin his idea of writing a work about the past 50 years of American history, Boriskin, who is Artistic and Executive Director of Music From Copland House, told Danielpour that they would commission the work. The project was quickly selected for support by Music Accord, an industry consortium of top-tier American concert presenters.

So began the journey of creating A Standing Witness, a cycle of fifteen songs written by Danielpour with Pulitzer Prize-winning author and former U.S. Poet Laureate Rita Dove. Though A Standing Witness had a delayed premiere due to the COVID-19 pandemic, it will finally reach audiences around the country beginning this month.

According to Boriskin, Danielpour has written for every major American orchestra and ensemble over the past three decades. He also notes that Dove, who “enthusiastically agreed [to collaborate on the piece]…has been an astute, fiercely independent commentator on the American experience.”

The duo wrote A Standing Witness for a mezzo-soprano – in this case, renowned opera star Susan Graham – and a chamber ensemble, Music From Copland House. Boriskin explains: “Having two of America’s foremost creative artists collaborate on a major work for us is an immense honor and a real recognition of the Music from Copland House ensemble’s place on the U.S. musical scene.”

The 65-minute retrospective looks at pivotal moments in American history from social, political and cultural standpoints, broken into multiple parts. Part One begins with 1968, a year that saw, among other things, the assassinations of Martin Luther King and Robert F. Kennedy. Part Two includes the moon landing, the Woodstock music festival, Watergate and more. Part Three takes a look at more recent events, like the AIDS epidemic and the attacks on 9/11.

Dove’s text for the project was just published in her new poetry collection, Playlist for the Apocalypse, and multiple performances of A Standing Witness will take place this year and next at locations across the country, including the Kennedy Center, Tanglewood, the University of Chicago, and more.