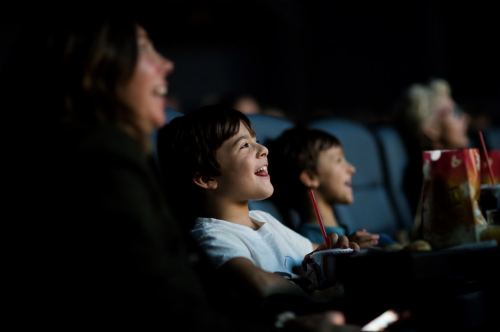 The legacy of The Bedford Playhouse is a storied one. It spans 75 years, six million dollars of renovations and one incredibly supportive community.

This three-quarters-of-a-century also includes the theater’s near-extinction, a community-driven fundraising effort, an international pandemic, and a complete restructuring of its programming. What stands today is a cultural center that offers film screenings, arts programming and a welcoming space that is conducive to conversation and discussion.

In the years following World War II, the Bedford Playhouse opened in the heart of Bedford Hills. The single-screen movie theater’s first screening was the Elia Kazan-directed Boomerang. Tickets cost between 30-80 cents. After nearly 68 years of screenings, a rent dispute threatened the future of the theater. In 2015, it shuttered.

Enter John Farr, who stepped up to the plate with a plan to head grassroots fundraising efforts that would keep the theater alive and turn it into a nonprofit organization. Farr already had success with co-founding The Avon Theatre in Stamford. The right price, according to the Playhouse’s landlord? Two and a half million dollars.

In a spirited effort, Farr, along with Sarah Long, who became Board Chair, pulled together a strategy to resurrect interest and support in the theater, boasting their vision for what-could-be.

Says Long: ”We knew the business couldn’t sustain itself as [just] a movie theater. That had already been demonstrated… So we had to do something more.”

The “something more” turned out to be the creation of a bonafide community hub that reopened in 2018 with two additional theaters, state of the art furnishings (Long flew to Michigan herself to test out the theater seats), high-tech equipment and a café.

Long adds that the café was a crucial part of the design: “We wanted a place where people could have a drink and talk about art and culture and movies. If you can’t stay and talk about something, you go home… and then you don’t have a place for the discussion. It was a really integral part of what we wanted the experience to be like.”

The building wasn’t the only thing to get a complete makeover. The Playhouse’s programming was also given an about-face, becoming inclusive of all different types of art, not just film.

This additional programming is supported in part by a capital campaign donation from legendary music producer Clive Davis, which established the Clive Davis Arts Center at Bedford Playhouse.

In May alone, the Playhouse does still offer Hollywood blockbusters like Doctor Strange in the Multiverse of Madness (opening May 6), and the ‘80s comedy classic Three Amigos featuring Steve Martin, Martin Short and Chevy Chase, which wouldn’t be complete without an introduction from Chase himself (May 18). However, also on the docket is a night of stand-up comedy (May 4) and a play reading by Kathryn Ryan (May 15).

On May 9, a screening of The Interview shines a spotlight on the parole board process for incarcerated people serving life sentences in New York State. The film is followed by a Q&A with panelists from both sides of the issue, including former incarcerated people and a parole commissioner. The Interview is part of the Playhouse’s Social Impact series, which includes programming related to mental health, the environment and social justice issues.

Executive Director Michael “Hoagy” Hoagland says: “There has to be a place where those conversations start. We’re trying to provide a safe space for those conversations and a place to not only educate our community but also challenge them to think a little more about each other as a community.”

The COVID-19 pandemic threw one more complication at the Playhouse. Luckily, thinking outside the box is nothing new to these folks. Hoagland is particularly proud of the outdoor “Broadway in Bedford” series that was created during the pandemic. In addition to live music and theater productions, this summer series will bring Broadway luminaries to the Bedford Playhouse’s lawn. He says: “We happen to have this beautiful lawn that is perfectly situated as a natural amphitheater, allowing us to do programming outside.”

This year, the “Broadway in Bedford” series will be expanded upon with “Broadway Behind the Curtain.” Each program dives into the career of someone who is influential on Broadway but may not be known to the general public. Starting off the series on June 5 is a part-performance, part-Q&A event with Tony-, Emmy-, and Grammy Award-winning composer/writer David Yazbeck, who has worked on The Band’s Visit, Dirty Rotten Scoundrels, Tootsie and more.

As for his vision for the Bedford Playhouse’s next 75 years, Hoagland says: “We try our hardest to create an environment that is welcoming and inclusive, and I want to make sure that everyone who walks through the door feels like they’re home.”