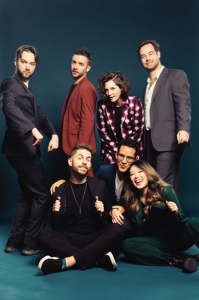 ArtsNews Editor Mary Alice Franklin recently caught up with Sammy Rae, leader of Sammy Rae & the Friends. The on-the-rise band that NPR called “Musicians to Watch in 2022” will headline the five-day Serious Fun Arts Fest in White Plains this fall (Oct. 12-16) with a closing concert celebration on October 16. For more about the festival and concert, visit artsw.org/seriousfunartsfest and follow #SeriousFunArtsFest on Instagram.

[This interview has been edited for clarity and length.]

Mary Alice Franklin (MAF): We’re excited to host you in October. The concert will be right out on the street, and it’s the big closing event for our five-day arts festival.

MAF: There seems to be a really strong sense of community among your fans. That’s something that really stands out: this kind of positive, fresh vibe. Can you speak to that a little bit? Is that something you try to foster?

SR: Yeah, a hundred percent…When [fans] buy tickets, listen to our music and get merch[andise], that’s the community that pushes us forward. And I knew that I wanted to keep them at the forefront because…if they don’t show up, we don’t get to do the thing that we love. So we’re always so grateful for their being there, inviting their friends, [and] sticking around. Our community of fans is super important to us. They’re really the basis of everything we do… That comes through in songwriting…but especially in the live show environment…

We try to keep it [our concerts] positive and be really honest… [Our shows are] the place where you come, be yourself\ves, dance how you like, wear what you want, make friends… It’s like ‘Let’s throw a party every night. You’re more than welcome. We can’t wait to have you. If it’s not for you, then that’s okay. At least we were honest.’ We try to do the best we can to…just say thank you in as many ways as we can.

MAF: And there’s such a great amalgamation of different sounds and influences in your music… How would you describe your own sound?

SR: That’s a tricky one… It’s a story/song driven, jazz-influenced rock and roll… with a touch of punk. Or a touch of disco.

MAF: What are some of your personal influences?

SR: I really love classic rock, and I’m always trying to bring “rock star energy” to the project. I listen to a lot of big bands from the ’70s. I’m a big Queen and Freddy Mercury fan. But I also really love Rolling Stones, E Street Band, Fleetwood Mac, The Doobie Brothers… I really fell in love with the big ladies of American jazz: Ella Fitzgerald, Etta James, Rosemary Clooney, Sarah Vaughan… These are voices that I really love and have taught me a lot about how to use my instrument to tell stories and bring songs to life. So jazz makes its way in[to our music]…

MAF: How would you describe a Sammy Rae & the Friends performance?

SR: We take ourselves very seriously, but we don’t take ourselves too seriously, if you know what I mean. We play and goof around and have fun, and hopefully inspire everybody out there to have fun and goof around and dance how they like, as well. We try really hard to make it feel like a safe and hugely inclusive environment, where folks from all different walks of life can come have a good time and find something that’s for them. My hope is that in the live space, there’s a little something for everybody.

SR: Yeah, it’s been wild. I think it’s unprecedented territory for everybody – for bands and performers, but also venues and venue workers. And also audience members.

It’s been a bit of a struggle because, with anything, when you kind of fall out of practice… to learn how to get back into it is a whole learning process.

We’ve considered ourselves very lucky that we got to play a great deal of festivals [over the] summer. Festivals are cool environments to be in front of audiences, where a small percentage of the audience knows who you are, and the rest of the audience doesn’t. So there’s this cool permission to try to get new people to jump on your wavelength, but also see how somebody who’s never heard you before takes it in and interprets you. So, it’s been a great learning experience…

MAF: Given that, from your perspective how can people support artists in this critical time?…

SR: That’s a really thoughtful question that I hadn’t been asked… I know for us, the merch aspect of things has been really life-giving because it’s a way for us to make something that isn’t just our music… When we weren’t able to be together in person, there was this real upswing in people being engaged on social [media], and people buying merch to continue to support and keep in the loop with us. I would say to do what you can to make your artists feel appreciated in the digital space…[and] you can support artists by being patient with them… We want to make you a record, and the record will come, but… it’s a lot to process, you know? And the landscape is always changing…

MAF: Tell me about the single For The Time Being [released in July].

SR: It’s a very cool, repetitive, sort of meditative mantra song. It’s a bit of a departure arrangement-wise for us because it’s heavily acoustic guitar-focused. Very stripped down… It’s our first song to feature the flute and the bass clarinet in lead roles, so it’s somehow found a way to strip something down and still keep it groovy, and still keep it hopeful and upbeat.

It’s a song about the present moment, and let’s be where we are right now…because I’ve got this love, I’ve got this thing, I’ve got what I’ve been looking for, but it could change. You know, how do we hold that and still move forward with hope and with positivity?

Several years ago, [our guitarist] Will Leet and I were getting ready to see a band at Brooklyn Steel. And it was this big moment of “Ah! Maybe one day our band could play there. Wouldn’t that be something?” We were just sitting around… He was playing guitar and I was singing, and For The Time Being started to come out…

Flash forward three and a half years, and now suddenly our band was about to play Brooklyn Steel, and it’s sold out. It’s the biggest night of our lives. And the words just rang true again… and I think there’s a classicness to it, where it’ll ring true again to the future.

MAF: Absolutely, I feel like especially in these times, [the song] really is a relatable sentiment.

SR: Yeah. Well, thank you! …We [ended up] play[ing] it for the first time live at Brooklyn Steel. And that was a really vulnerable moment…

MAF: What about your upcoming documentary?

SR: So, we had a friend who was following us around during our Follow Me Like The Moon tour… [There’s] behind-the-scenes, guerilla style [footage]: what it’s like living on a tour bus, what it’s like in the green room, what it’s like to be traveling and dealing with, you know, the uncertainties of COVID…. [So it’ll be] a roughly-30-minute docu-piece about our first national tour.

It starts with us rehearsing the day before we got on the bus…and then we all went home and went to bed, and the camera was on us at 8am the next day, on the tour bus where we would live for over a month… It continues to follow us as we…play the largest venues we’ve ever played… Then we had about three weeks off, and then the culmination was this huge [sold out] show in New York at Terminal 5.

MAF: What’s next for Sammy Rae & The Friends?

SR: We’ll be releasing another single [If It All Goes South] at the end of August… And then when we get to winter, we will be touring the UK for the first time. So a new single, new music video, a little bit of a documentary, and then a whole bunch of traveling around to meet people in places we haven’t been to yet.

MAF: That’s great. We’re excited to be a part of your fall tour, and welcome you back to New York after lots of other shows around the country.