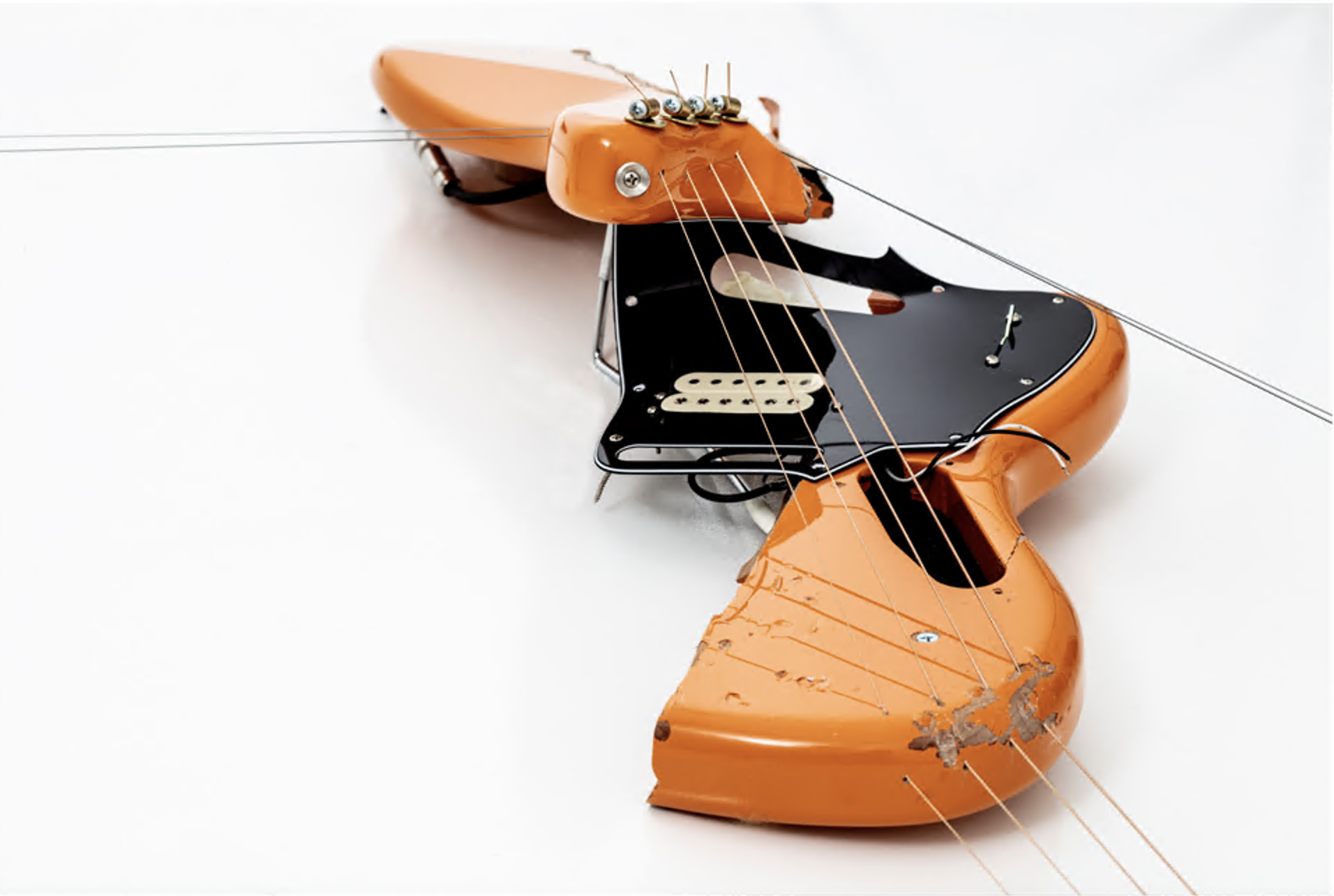 The male-rock-star smashed-guitar cliché is nothing new. But in Naama Tsabar’s internationally acclaimed 2018 Melodies of Certain Damage installation, the artist uses this same cliché as a device to explore connections between destruction and creation.

Tsabar begins by breaking a guitar in her studio, alone. Then she reassembles new instruments that defy categorization using piano strings, guitar strings and hardware. There is a sort of alchemy involved; the pieces transcend brokenness to occupy a new, hopeful space. Tsabar shifts the focus from a violent act to a focus on its aftermath. What might arise from the ashes? She then, along with several collaborators, plays the instruments.

This month, KinoSaito Art Center will bring Tsabar on-site for an installation and set of performances that feature these exploded guitar works. With collaborators, the Israeli-born, New York City-based artist will rehearse at the Center to build and perform a musical composition, Melodies of Certain Damage, Opus 5.

Tsabar works exclusively with female-identifying and gender-nonconforming performers in her projects. She explains: “Thinking of these works as new instruments – and thinking about the history of mastering an instrument as being so gendered and so male, [working with non-male performers] gives them a new history and a new gender.”

The cast includes KinoSaito’s Treasurer and board member Sarah Strauss, who is also a drummer that has worked with Tsabar in the past. Strauss was involved with the planning and opening of KinoSaito last September, helping to transform its building from a former Catholic school into the current multidisciplinary arts center.

Strauss adds: “During the design and renovation process, I kept imagining Naama performing this piece, which has a destructive-creative energy that rhymes perfectly with [our] work of turning the wreckage of a neglected school into a world-class art space.”

Strauss explains that KinoSaito is rooted in the creation and practice of abstract art, and is committed to experimentation. The Center also honors the spirit of its founding muse, Japanese-American abstract painter and avant-garde theater designer Kikuo Saito (1939–2016). Once a Catholic school, and then Saito’s studio, the building now houses several galleries and residency studios, as well as a performance space, classroom, café and garden.

“We are in a circular pattern as a species…constantly destroying and having to pick up the pieces,” observed Tsabar. She references past art movements like Dada, which sprang out of a resistance to capitalism and war. “Art reacts to… the stress of the human condition, [introducing] new ways of thinking about creation.” When the Arab Spring began in 2010, “there were all these…archaeological sites that were bombed… That, paired with the devastation of killing, shook me so much – and brought me to these works.” However, Tsabar concedes, “there is hope in these works; there is a way to think about the breaking as generating a new life, and a new way.”

Naama Tsabar brings Melodies of Certain Damage, Opus 5 to KinoSaito for four performances on May 14 and May 21. When performances are not taking place, visitors may interact with the installation. The Center will also hold all-day screenings of two of Tsabar’s video works: Untitled (Babies) on May 15 and Stranger on May 22.

Sarah Van Buren is an artist, educator, sound maker and raver based in the Hudson Valley who works with music, sound and collaborative performance to investigate buried histories, communal ritual and collective resonance.