An exuberant arts and business partnership between ArtsWestchester and Ridge Hill Shopping Center began years ago. However, during the past two years, as shopping waned due to lockdowns and visitor hesitation, this collaboration was reinvigorated with the aim of welcoming shoppers back to Yonkers. Through a series of temporary and permanent public art projects, ArtsWestchester has collaborated with Ridge Hill to transform its main thoroughfare, Market Street, with outdoor artworks installed in locations where they can be enjoyed by all. The shopping experience for visitors is now enhanced with dynamic community spaces along the Center’s streetscape. 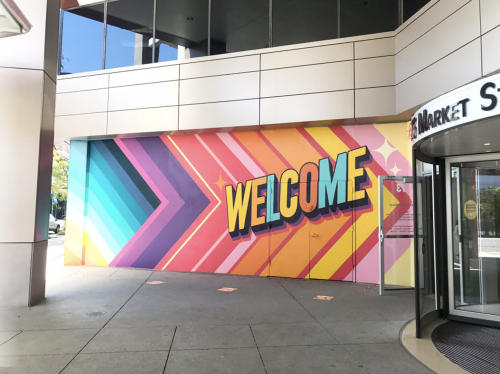 The bold use of color and typographical know-how by artist Andrea Von Bujdoss (“Queen Andrea”) present a mural that features a rainbow-colored arrow pattern with one distinct word: Welcome. The arrows on these temporary walls act as a way-finding tool, warmly leading shoppers back into the retail space. 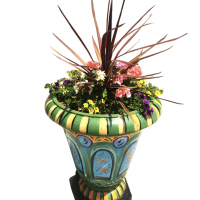 Mixed-media artist Ann Ladd was commissioned to design a set of eight planters that are installed along Ridge Hill’s sidewalks during the warmer seasons. The whimsical designs are characteristic of her joyful paintings that celebrate nature. 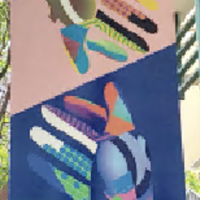 Artist Alfredo Ponce won an invitational request for proposals for a series of lamppost banners installed along Market Street. Ponce’s Community series, which feature abstract or figurative compositions in a style that Ponce refers to as “Collage-Minimalism,” highlight the diversity of Yonkers. 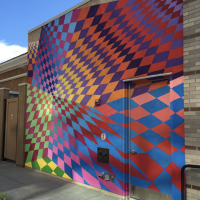 The first public art project in the partnership between ArtsWestchester and Ridge Hill Shopping Center was this selfie-worthy mural by artist Nick Kuszyk, created on Cole Street in 2015. The street-level mural’s multicolored geometric design includes cascading colors that reference the property’s brickwork. 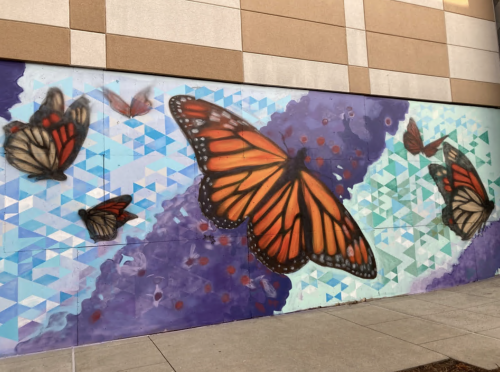 Artist Chris Soria painted a mural series across several construction walls at Ridge Hill that focus on pollinators and pollinating plants. Among the murals is a giant swallowtail butterfly hanging off some goldenrod flowers, as well as ladybugs, sunflowers, local honeysuckles, a hummingbird and more. 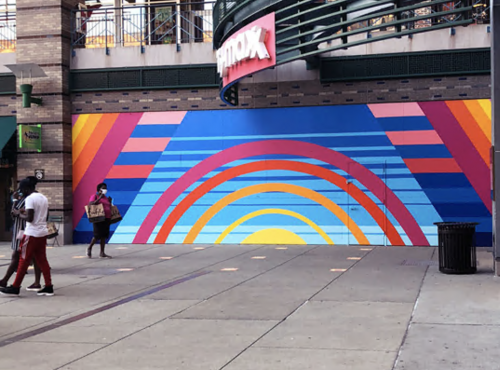 On the North end of the Ridge Hill property, artist Andrea von Bujdoss (“Queen Andrea”) created this mural on a vacant storefront that was boarded up with temporary walls. Von Bujdoss sees it as a way to “brighten up people’s mood during such a difficult time.” 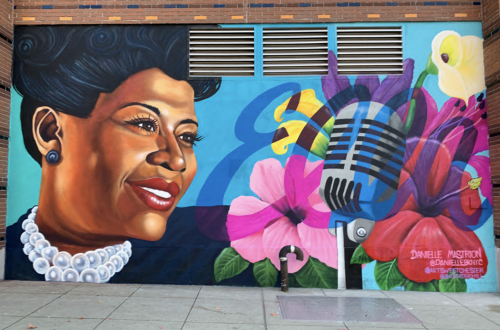 Ella Fitzgerald, although born in Virginia, grew up in Yonkers. Appropriately, Ridge Hill’s Fitzgerald Street now boasts a permanent 12′ x 25′ mural of Fitzgerald on this street. Artist Danielle Mastrion’s portrait of the singer is colorful and surreal in style, a reflection of the artist’s time working along New York’s urban landscape. 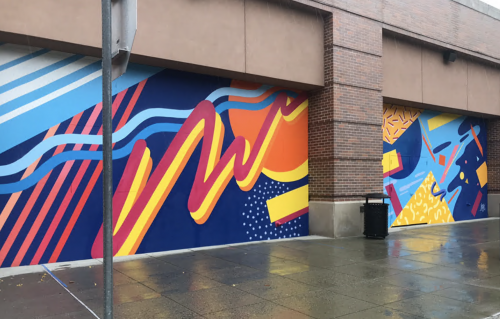 Two adjacent walls on this boarded up property sport more brightly-colored and playful designs by artist Andrea Von Bujdoss. The lively designs will activate the previously-vacated space until the property is occupied.