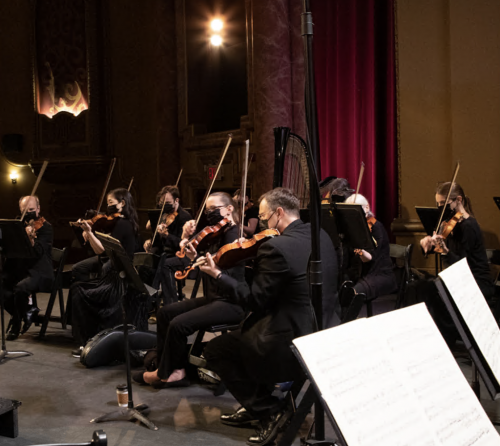 In March 2020, The Chappaqua Orchestra, like most music groups, found themselves unable to perform in person due to the COVID-19 pandemic.  It seemed prudent then to buckle down on a plan that was years in the making. Emerging now from the pandemic year is a group with a new name, new location and new music director. “Orchestra 914” is ready to begin a new season with a fresh outlook on the future.

Co-Director David Restivo explains that “these were all important components that needed to happen in order for [the group] to survive.” He explains that the general assumption about Chappaqua Orchestra seemed to be that they were “local and amateur.”

“We knew we needed to change that perception if we wanted to widen our reach,” he explains. “Though we began 60-plus years ago as a mix of professional and amateur musicians, we’ve been a fully professional group with a larger reach for years now. Our name needed to reflect that.”

The new Orchestra 914 name, Restivo says, “covers it all – what we do and where we are.”

While the plan is currently for the orchestra to “bounce around the county” with shows in Peekskill, Bedford, Tarrytown and Mount Vernon, he says that he and Co-Director Amy Harter, along with their board, wanted to find a town that was a “leader and supporter of the arts.”  He calls their new home in Pleasantville “the perfect home base.”  Though they don’t have a permanent performance space in the town yet, he envisions one for the future.

The final piece of the rebranding-puzzle was to find a new music director. After an extensive search, they whittled the contenders down to five, and gave each of them their own concert. Though Restivo says that they were all great, Brooklyn-based Russell Ger knocked it out of the park.

Restivo laughs, explaining that during their interview, Ger hit on almost every item on the group’s internal list of core values without having ever seen them. “I texted one of our members [to jokingly ask] if Russell had a copy of our branding sheet… He’s intense, and knows how to speak to an audience. He’s the perfect fit for us right now.”

Orchestra 914 aims to provide “unexpected orchestral experiences for diverse audiences,” according to the group’s new website. Restivo is confident that Ger can deliver what he’s looking for – “a sort of ‘sophisticated hipster’ goal” – and expects that the music director’s creativity will bleed into unexpected ideas in their repertoire and programming.

“We’re going to change our look a little and not always wear traditional tuxedos,” he says. “And we won’t always play traditional stuff. A typical concert is an overture, concerto and symphony. That may happen, but it doesn’t have to, and we won’t always do that. We’ll throw stuff in there that will be interesting and new.”

In fact, Ger’s premier concert with the group (November 21 at Paramount Hudson Valley) is an unusual one: it will be all strings rather than full orchestra – a good example of how they’ll be “breaking the norm.”

The 2021-2022 season will run through May 2022, beginning with a chamber music quartet on the lawn at Bedford Playhouse on September 10. More of the season includes interactive family performances, a December holiday concert and more.

As for future goals, Restivo lists some objectives: expand the concert season from five-to-six concerts to eight-to-10; eventually have a performance home in Pleasantville; do more outreach with local school districts; continue to be creative with programming.

“It feels like a new group. Even though it’s kind of been the same group for the past 60-plus years, it really is new and feels like it.”