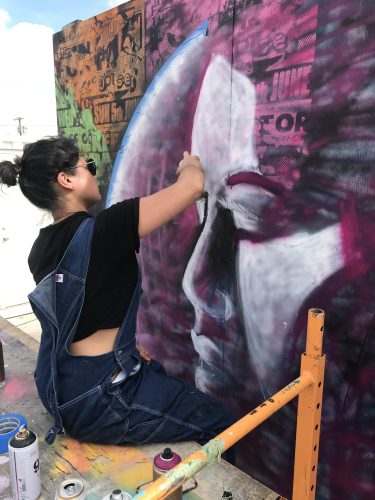 The City of White Plains will soon become even brighter as developers partner with ArtsWestchester to flood the City’s walls and public spaces with original artworks and sculptures by area artists. It’s all in the name of the organization’s five-day Serious Fun Arts Fest on October 12-16, which is presented by Montefiore Einstein and produced by ArtsWestchester. The result will be an economic boom that lasts far beyond the festival’s final day.

Bianca Romero is one of the first artists commissioned. Her nine-story high-rise mural will adorn The Mitchell, a modern 434-apartment home project currently in development by LMC, a leading apartment developer and manager. Romero is a New York City-based artist, muralist and creative director known for her bold and colorful murals and paintings that are made from hand-cut and collaged street posters layered with spray paint. Romero, who is heavily influenced by New York City’s vibrant energy and urban textures, uses mixed-media collage as a visual interpretation for exploring personal identity, as well as the collective pieces that make people unique.

Romero adds: “For this mural, I wanted to explore the history of the region and pay homage to where and who the White Plains land originally came from.”

This is one of the things that drew LMC, a Lennar Company to the piece. Greg Belew, the company’s Divisional President, NY Metro Area, shares: “Romero’s vibrant mural was commissioned by ArtsWestchester. It pays tribute to the origins of White Plains and holds space in a very contemporary way for the history of this city.”

Romero explains some of the ways in which the work harkens back to the City’s origins: “The mural has many elements that pay homage to the Native American tribe that occupied the White Plains land…For one, the water represents the Native American word ‘Mamaroneck,’ meaning ‘the place where the sweet water meets the sea.’ As the mural’s future location is on Mamaroneck Avenue, the work symbolizes both the location and the Native American tribe. The water swirls around the woman pictured in the mural. It ascends and swirls into hills and land. This represents the White Plains land itself.”

Belew adds, “We are excited to serve as the canvas for Bianca’s art and to help showcase her talents. Our hope is that the public art installations underway for the upcoming Serious Fun Arts Fest will enliven and brighten the landscape for the betterment of the City.”

The festival will bring new works of public art to the City, in addition to concerts, live mural painting, a public art walking tour and family art-making activities throughout the downtown area. Updates will be announced on ArtsWestchester’s website and on the festival’s official hashtag at #seriousfunartsfest.