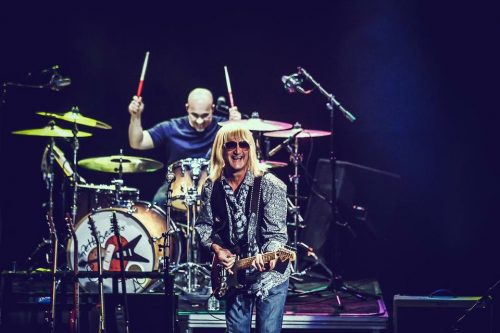 The Breakers will perform on 7/9 (photo credit: Shawna Sarnowski Photography)

Tarrytown Music Hall (TMH) has long been a performance space for diverse musicians. However, like other venues, the historic theater had to shut its doors last year due to the pandemic.

“The Covid shutdown is the biggest challenge we have faced during my almost-two-decades as director…Our earned revenue disappeared overnight,” says TMH’s Executive Director Bjorn Olsson. Now, despite the prolonged closure, TMH is still alive.

During the pandemic, the theater focused on staying connected with patrons by offering as many programs as possible. Livestreamed concerts have been a resourceful method of providing entertainment for its members, and a chance for local and emerging artists to perform.

However, Olsson says that the online format does not compare to live performances. He explains that the pandemic reminded him of how indispensable and irreplaceable live performances are: “Performance art is a form of communication. When you are in an audience, you are participating.”

Now the theater’s curtain has finally gone back up. World-renowned classical violinist Joshua Bell kicked off the in-person performance season with a fully packed audience this past June. All audience members were vaccinated and were able to experience the performance without masks.

“It was one of the best shows we’ve seen in the theater. Everyone was so happy that music was back.”

According to Olsson, TMH will continue to follow the safety guidelines that New York State issues. It is not certain whether any restrictions will remain after the state has reached the 70 percent vaccination rate, but TMH’s concerts will be open to all audiences and health protocols will be updated as official guidelines are provided.

The theater has a lively line-up of shows and concerts this summer and fall. Audiences can look forward to an in-person concert by legendary English rock band Squeeze on August 14. Breakers will perform a tribute concert to Tom Petty (July 9); and Eaglemania performs hits by The Eagles (July 30). Other live tribute concerts will feature the music of the Grateful Dead and the Rolling Stones on August 8 and 13, respectively. Singer-songwriter Willie Nile, who has played with notable artists Bruce Springsteen and Carole King, will take the stage with special guest and singer-songwriter James Maddock (August 21).

Along with the pandemic ending, Olsson hopes for great performances, not just at the Music Hall, but at all arts venues in Westchester. He adds, “We could have a great performance arts year in front of us.”