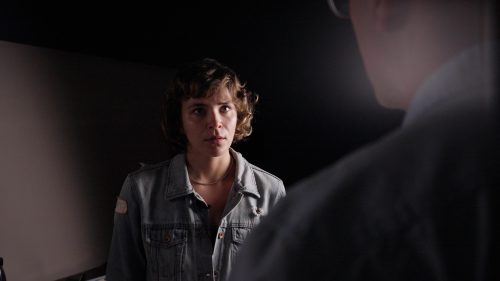 Katonah Classic Stage (KCS) had just been established as a new professional theater in Westchester when the COVID-19 pandemic struck, forcing KCS to pivot towards online programs, smaller productions and an outdoor film festival. This month, however, KCS will bring live theater to Katonah with a production of David Mamet’s play Oleanna at Bedford Historical Hall.

The two-character drama is about the power struggle between a university professor and one of his female students, who arrives at his office to discuss her grades.

Though the play was written about 30 years ago in the wake of the Anita Hill and Clarence Thomas hearings, Trent Dawson, Emmy Award-nominated actor and KCS’s Founding Artistic Director, says that the play continues to encapsulate subjects such as sexual harassment and political correctness that are still pertinent today.

KCS’s Oleanna revisits this story with the newfound lens of the #MeToo movement and “cancel culture.”

Dawson explains: “It’s as if David Mamet could see the future. The social and political views addressed in the play are so present and relevant to current dialogue, especially on college campuses.” He hopes the production will engage audiences and encourage them to continue these conversations even after leaving the theater.

The fact that the fully-staged production consists of one set and only two actors allows flexibility for the company to comply with COVID-19 restrictions and ensure the safety of audiences while also providing an entertaining experience. Still, KCS will require proof of vaccination at the door and a mask mandate to ensure the safety of its audiences.

KCS, which is dedicated to performing classic pieces of theater, was founded by Dawson and his wife, Executive Director Sharron Kearney, with Katonah in mind. Dawson explains: “Katonah has an amazing arts community with nearby places like Caramoor Center for Music and the Arts, Katonah Museum of Art and John Jay Homestead, which seemed like the perfect location to start a theater company.” Dawson and Kerney hope that the KCS will help to maintain Katonah as a cultural destination and hub for audiences and local actors, not only in Westchester but also in NYC and Connecticut.

Oleanna, starring Lea DiMarchi and Jordan Lage, will be presented from November 4 through 14. An opening night party at the Bedford Playhouse will follow the show on November 5.​​

A version of this article first appeared in the November issue of ArtsNews, ArtsWestchester’s monthly publication. ArtsNews is distributed throughout Westchester County. A digital copy is also available at artsw.org/artsnews.​​​