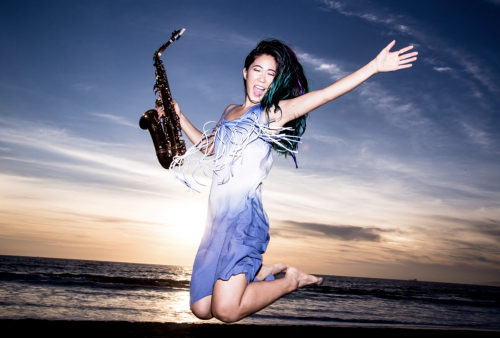 Saxophonist Grace Kelly is altering traditional ideas of jazz music while making notable strides in her genre. Performing in over 30 countries, recording thirteen albums, and being a member of the house band for Late Night Show with Stephen Colbert are only a handful of her accomplishments thus far.

Added to her resume will be a September performance during JazzFest White Plains, a five-day celebration of jazz on September 12-16 that showcases established and emerging talents.
Kelly began performing when she was 12 years old, and the saxophone quickly became a friend. Jazz in particular captured her attention for the way it lends itself to improvisations. Kelly explains that she loves to bring different styles together in her music – and jazz allows her to do that. The idea that there are always new things to learn and create is what makes her love being a musician: “Music is such an amazing teacher because you never have an ending point.”
The musician has attracted the attention of a younger audience through her performances and social media. She explains that “the general public can potentially see jazz as a very old art form – but it is really a flourishing genre and there’s a lot of cool music that’s coming out of the younger generations.”
“It really warms my heart when I hear from other young women, specifically other Asian women, who follow my work and are inspired by what I do, and now feel like they can do it as well. That’s the power of having role models in this world, and we all need them!”
Being a role model isn’t new for Kelly. In addition to playing music, she has found a love for teaching it. Alongside a few musical partners, she started an online saxophone school called Saxy School. Together, they taught thousands of saxophonists on Zoom during the pandemic, and the school has continued to grow.
While she calls her online education program a silver lining of the pandemic, Kelly is happy to be playing live music again: “I’ve seen the power of playing music for others. Whether there are tears streaming down faces or people jumping up and dancing, I love being there to create that feeling,” she said.
She will create that feeling at her September 15 JazzFest White Plains concert, which will also serves as an album release show. While self-discovery and self-expression were driving the story of her past albums, her newest works one draw from the word ‘courage’ and the words of women who embody it, such as Maya Angelou.
“I have some cuts on the album that are very loud, bold and in your face, and then I have some that are super stripped back and courageous in the way that I just want to give you my full heart with all of its vulnerable parts,” says Kelly. This, alongside the feeling of reuniting with fans after time apart is at the core of her new music.
The outdoor JazzFest event will include a performance in addition to a welcome drink and canapés from Italian restaurant Via Garibaldi. Kelly hopes that her audience takes away “a lot of joy” from seeing her perform, and is excited to share an experience during which the music lifts everyone’s spirits.