The holidays are upon us and virtual and in-person* celebrations are aplenty throughout Westchester County. The ArtsNews team rounded up their top Holiday Arts Picks from a long list of festive offerings. For more arts events, sign up for ArtsWestchester’s weekly Top 5 Arts Picks newsletter.

*Readers are responsible for checking with each venue for their specific COVID-19 safety protocols. 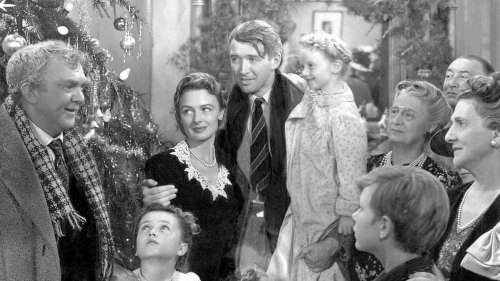 Get the Popcorn Ready

Bedford Playhouse is preparing for the “hap-hap-happiest Christmas” season with the Griswold family. When the Griswolds have their families over for the holidays, chaos and hilarity ensue in National Lampoon’s Christmas Vacation. The classic Christmas comedy starring Chevy Chase will be followed by cocktails, an ugly sweater contest and a holiday sing-along in the Playhouse Café.

This 1946 film has become a holiday tradition in many households across the country, but now viewers can see this heartwarming story of love, gratitude and redemption come to life on the big screen. As George Bailey, played by James Stewart, contemplates ending his life on Christmas Eve, he is visited by an angel who shows him the positive impact he has had on those around him. The beloved movie will be screened at Bedford Playhouse (December 21) and Jacob Burns Film Center (beginning December 17). 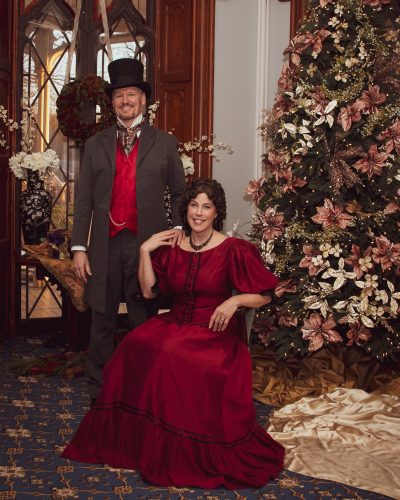 Charles Dickens’s A Christmas Carol is one of the most iconic holiday stories of all time. This season, several groups in Westchester will present their own versions of the classic novella, from staged readings to musicals – all unique from one another.

December 12
God Bless Us, Everyone

The Asbury-Crestwood United Methodist Church will celebrate its 250th anniversary with God Bless Us, Everyone, presented by Music at Asbury. The show is a staged reading of Dickens’s classic holiday story A Christmas Carol, complemented with songs by Alan Menken and Lynn Ahrens, Alan Silvestri and Glen Ballard and a selection of familiar Christmas carols for the audience to sing along. The production also includes a special appearance by the Westchester Children’s Chorus.

In 1867, Charles Dickens gave a performance of his beloved A Christmas Carol novella.  His telling of the story brought to life his characters of Ebenezer Scrooge, Bob Cratchit and Tiny Tim as he reportedly gave each character a different voice. Storyteller Michael Muldoon will recreate this famous performance in a series of events presented by M&M Performing Arts Company in the historic period setting of Lyndhurst Mansion.

December 26-31
A Christmas Carol: A Story Of Hope

The musical A Christmas Carol: A Story Of Hope is a new adaptation of the Dickens classic, set in 1843. Though published almost two centuries ago, some of the story’s struggles can still be recognized in today’s society; but above all, it offers a key message of hope. The production, produced by Yorktown Stage and Princess Art Productions, features an original score by Martin Harich and Matej Smutny and set by British set designer Dave Benson.

December 3-30
A Christmas Carol: The Musical

This musical version of the classic tale of Ebenezer Scrooge is brought to life with music from Broadway composer Alan Menken and book and lyrics by Lynn Ahrens and Mike Ockrent. The musical, originally presented at the theater at Madison Square Garden where it had a decade-long run, will now be produced for Westchester audiences as a mainstage production at White Plains Performing Arts Center. 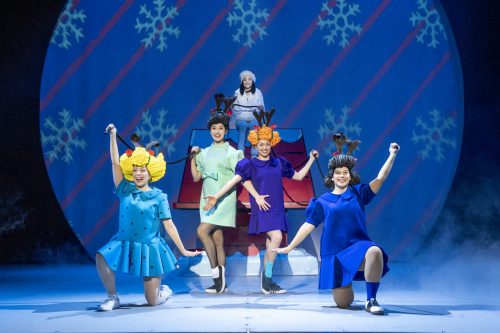 Scene from a performance of “A Charlie Brown Christmas Live on Stage” (photo credit: Richard Termine)

New Castle Historical Society’s The Great Holiday Train Show features numerous vintage model train sets that will run throughout the cheerfully decorated rooms of the Horace Greeley House Museum. This display will travel through backdrops with festive themes, including a Bavarian countryside scene, the 1920s “golden age” of train travel and more. Also included are a pop-up holiday shop with train-themed items, candy and more.

Charles M. Schulz’s animated television special A Charlie Brown Christmas will come to life in a new touring production with performances at the Chappaqua Performing Arts Center before its New York City run. This family-friendly production, featuring music by Vince Guaraldi, will follow Charlie Brown, Snoopy, Lucy, Linus and other beloved Peanuts comic characters as they learn about the true meaning of Christmas.

Though not an “outing,” families can still celebrate from home with White Plains Public Library’s holiday craft kits for Shabe Yalda, Christmas, Kwanzaa and Three Kings Day. Each kit is filled with activity sheets and a craft for children aged preschool-2nd grade. The kits will be available in the lobby on a first-come, first-serve basis while supplies last.

Ballet des Amériques will present its annual production of The Nutcracker, this year at the historic Wainwright House in Rye. Inspired by the original choreography of Marius Petipa and Rudolf Nureyev, choreographer Carole Alexis has created an adaptation that will immerse audiences in this classic ballet story, which takes place in the 19th-century mansion of the Stahlbaum family. Students from the Conservatory will perform to Tchaikovsky’s signature score.

Untermyer Park and Gardens welcomes visitors to its Grand Holiday Illumination. The display includes more than 100,000 lights that adorn the walled garden and holiday music from many traditions. Tour hours: 4:30-8pm. 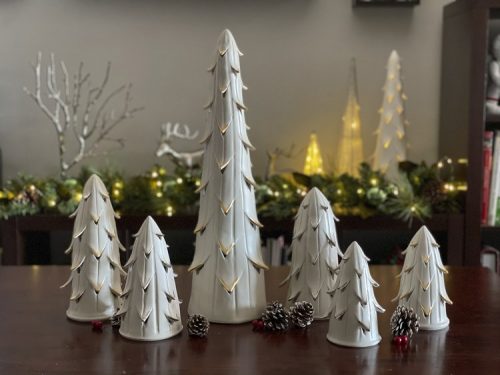 Clay Art Center presents a Clay Holiday Market featuring hundreds of pieces of functional pottery and ceramic sculpture by national and regional artists. It is an opportunity to purchase one-of-a-kind ceramic art and objects for holiday gift-giving as well as for one’s own use. Shop hours: 10am – 5pm. 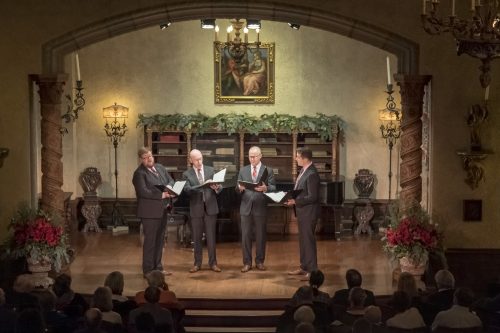 New York Polyphony in Caramoor Center for Music in the Arts Music Room. They will perform there again 12/11 (photo courtesy of Caramoor)

New Choral Society will ring in the holiday season with its annual performance of G.F. Händel’s Messiah, Part I at the Hitchcock Presbyterian Church in Scarsdale. This classical program will depict the prophecy of the Messiah and his virgin birth and conclude with the beloved Hallelujah Chorus. This year, the Chorus also will offer a virtual viewing of the performance beginning December 8.

December 3, 4, 10, 11
Tree and Menorah Lightings with The Westchester Chordsmen Chorus

A series of holiday concerts, presented by The Westchester Chordsmen Chorus, will kick off several tree and menorah lighting ceremonies in Scarsdale (December 3), Rye (December 4), Hastings-on-Hudson (December 10) and Mamaroneck (December 11) this December. The uplifting concerts will feature traditional seasonal songs performed by more than 30 members of the chorus.

Classical yuletide sounds will fill the Music Room at Caramoor Center for Music and the Arts during a series of performances by the New York Polyphony. The all-male a cappella vocal quartet will perform Sing Thee Nowell, a program of sacred Christmas music that spans seven centuries. Holiday decorations at Caramoor’s Rosen House will also be on display before each of the two performances.

The Songcatchers will bring festive holiday songs to audiences at its 26th annual Concert for Peace. The group’s Concert Choir and Ensemble, a 50-member intergenerational chorus consisting of children and adults, will perform secular and interfaith carols, songs of peace and multicultural songs of the holidays. 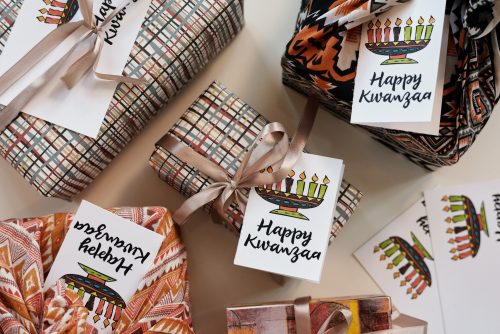 December 16
The City of Mount Vernon’s Youth Bureau will host a Pre-Kwanzaa celebration with further details to be announced.

December 19
The “It Takes a Village” Pre-Kwanzaa 2021 Program at the Nepperhan Community Center includes dinner, vendor shopping and dancing. The family-friendly event is presented by Sister to Sister International and other community partners.

December 26
The Town of Tuckahoe presents a celebration of family and culture at its Kwanzaa Celebration 2021, taking place at the Tuckahoe Community Center.