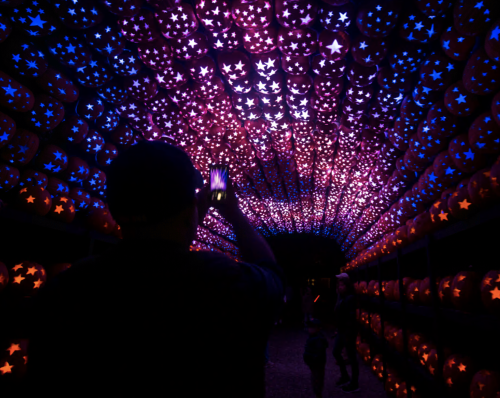 Arguably the leaders of Halloween entertainment in Westchester, Historic Hudson Valley continues to offer its beloved annual programming of the fall season. The Great Jack O’Lantern Blaze at Van Cortlandt Manor draws crowds from far and wide through Nov 20. The event presents a display of 7,000 illuminated and hand-carved jack o’lanterns. At Washington Irving’s Sunnyside on weekends through October, storyteller Jonathan Kruk will give a dramatic performance of the classic The Legend of Sleepy Hollow, which will be perform outdoors for the first time ever. Also at Sunnyside is Home of the ‘Legend’, a family-friendly tour of Irving’s house through Nov 13. Two online offerings include a shadow puppet film version of the Legend story, and a new interpretation of the story featuring Kruk.

Jacob Burns Film Center (JBFC) kicks off its Halloween season on October 21 with a triple-feature of horror movies that highlight women filmmakers: A Girl Walks Home Alone at Night, The Babadook, and Titane. The following day, JBFC celebrates the 40th anniversary of E.T. the Extra-Terrestrial. Kids who attend this screening in costume will get a special treat. On October 25, the center celebrates another anniversary – 100 years of the silent horror classic Nosferatu, which will feature live piano accompaniment by Ben Model.

In the spirit of Halloween, Lyndhurst Mansion creates a display that discusses the “spookier and darker subjects” of the Mansion’s history, such as Victorian mourning practices, death photography, and former owner Jay Gould’s supposed ties to the occult. The Lyndhurst dining room is set for a festive Halloween party, but also features a crystal ball owned by Helen Gould, which was used to reach out to spirits for communication. Staying true to its Lyndhurst After Dark name, traditional candlelight with the overhead lights dimmed, creates a darker ambiance in the house.

In this outdoor event, classically-trained actor and professional storyteller David Neilsen will perform a retelling of Washington Irving’s classic short story The Legend of Sleepy Hollow, which tells the tale of Ichabod Crane and the Headless Horseman. The family-friendly event also features Halloween treats and activities.

Halloween doesn’t always have to be scary. At Westchester Children’s Museum, little ones can partake in the fun with a day of workshops, crafts and costumes. The day includes two costume parades, a spooky-themed program for babies aged 6-30 months, and a workshop that explores all things creepy and crawly while children learn about (and get a visit from) a tarantula, cockroaches, snakes, and a bearded dragon.

Not for the faint of heart, librarian and film historian Chris Poggiali will introduce and discuss a double feature of horror movies at Ossie David Theater. First, in Halloween III: Season of the Witch, a young woman is aided by an emergency room physician in her investigation of a mysterious Halloween mask manufacturer who may have been responsible for her father’s gruesome murder.  Next, in Race With the Devil, two vacationing couples witness a satanic human sacrifice and are pursued by witches.