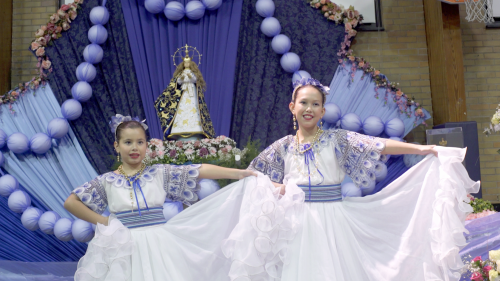 The annual festival of the Virgen is the most important religious holiday for Catholics in Paraguay and the Paraguayan diaspora. The Virgin of Caacupé or Virgen of the Miracles of Caacupé is a variant of the Marian invocation of the Immaculate Conception. In Westchester, the celebration takes place in the Village of Mamaroneck, at St. Vito Most Holy Trinity Parish. Each year, the festival draws hundreds of Paraguayan American families from around the region for a special processional and mass, followed by a community celebration that features traditional foods, live performances of Paraguayan harp and social dances like the Paraguayan polka.

In the months leading up to the annual festival, a statute of the Virgen visits the homes of local families, where she resides for days on end, bringing her miracles and blessings to each household. In a short film produced and directed by Paraguayan filmmaker Gustavo René Sanabria, the Virgen of Caacupé arrives at the home of Bedford resident Elida Aranda Sanabria. There, the Virgen is welcomed by members of the Comisión Virgen de Caacupé, the chief organizing body of the annual Festival of the Virgen of Caacupé in Mamaroneck. The Comision, along with Elida and her family, recite the rosary and sing songs of praise in Spanish and the indigenous Guarani language. A small feast of traditional Paraguayan foods, beverages and snacks, including chipa, a baked cheese and corn roll, is enjoyed by all at the conclusion of the ritual.

This tradition in the United States dates back to 1993. The first statue of the Virgen of Caacupé to arrive in the country was brought to Westchester County that year by former Paraguayan President Juan Carlos Wasmosy and a group of his delegates. Since then, Paraguayan communities across the United States have commissioned statues of the Virgen from Paraguay for their own annual celebrations.