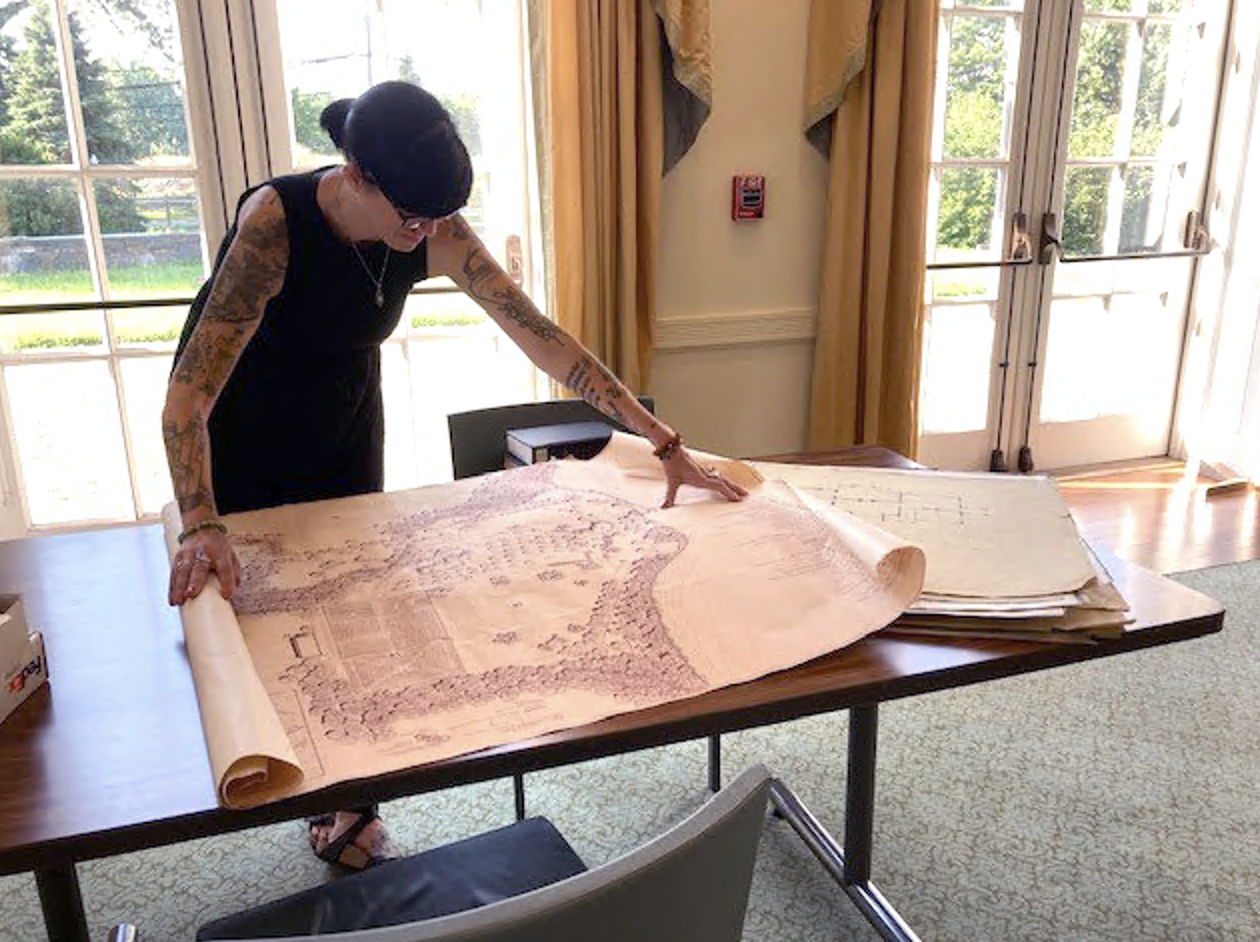 This year’s cohort of Summer Research Fellows from the Women’s History Institute at Historic Hudson Valley (HHV) was the first in the program’s history to pay closer attention to the experiences of female servants who worked at estates like Washington Irving’s Sunnyside or Van Cortlandt Manor. Now, because of fellows Margaret Holmes and Lawrence Mullen, HHV tours include more information about domestic workers.

“This is a group that has been sidelined,” said HHV Research Librarian Catalina Hannan. “They’ve always been there. They’re just waiting in the shadows, and we’re calling them out now.”

During their time at HHV, Holmes and Mullen conducted research using HHV’s library and archive. The annual fellowship gives college and graduate students access to HHV’s extensive collection in order to increase the organization’s knowledge of the women who have lived in historic homes along the Hudson River Valley.

Fellows work under Hannan’s guidance from the application phase all the way through the research and presentation phases. Within six weeks, these emerging academics, specializing in 18th and 19th-century mid-Atlantic women’s history, produce a blog post, a mid-term report and a final project or paper that is presented to the Selection Committee of the Women’s History Institute and the HHV staff. Past fellows have gone on to use the basis of their summer research to publish academic papers and books.

Holmes, the recipient of the Margaretta (Happy) Rockefeller Fellowship, studies Irish domestic workers in 19th-century New York. Focusing on Washington Irving’s Sunnyside estate, the museum educator and public history student focused on the Legend of Sleepy Hollow author’s domestic workers, Robert and Mariah McLinden. Her work, which lives at the intersections of race, class and gender, examines these servants’ material culture in contrast to the lives of their employers in an attempt to unpack and dismantle harmful stereotypes such as the “Irish Bridget,” a derogatory term that referred to Irish immigrant servant girls.

Through her research, Holmes is able to humanize the experiences of these Irish women who were willing to do work that was considered demeaning for women in 19th century American society. Holmes says that she finds Sunnyside a unique environment for domestic servers. Unlike most 19th century homes of this stature, the kitchen and service areas were adjacent to entertaining rooms. This means the largely Catholic workers interacted more with their Anglo-Saxon Protestant employers. Irving eventually had a cottage built on the estate for the McLindens, who were highly-regarded servants on which he and his family relied.

Speaking on how her research engages public history, Holmes notes that she uses her research to help make domestic works more enmeshed in the stories of men like Washington Irving.

According to Holmes, women and domestic workers made Irving’s career possible and they should feature in every part of an estate tour: “More people can relate to the working-class folks than the families who own the homes.”

Looking closer at the tour narrative for Van Cortlandt Manor, Mullen found that the period from 1850 to 1953, when John D. Rockefeller bought the house, is reduced to two paragraphs. Catherine Elizabeth Beck Van Cortlandt, Pierre Van Cortlandt III’s wife, is credited with preserving documents and maintaining the home.

Says Mullen: “Because my field is the 19th century, and that was glossed over, immediately I began thinking: ‘Who are these people? How are they living in this house?’”

Since then, Mullen has examined changes at Van Cortlandt Manor throughout the 19th century. Focusing on Catherine, Pierre III, and their nine children, Mullen considers how additions to the house influenced the domestic lives of its residents, including the female servants.

Mullen discovered the story of a window etching gifted by Nathanial Hawthorne’s wife for a birthday. This window is the subject of a blog post by Mullen. For their final project, Mullen’s digital exhibition will examine the addition of east and west wings to the home, along with other changes in decorative styles during Catherine and Pierre III’s time at Van Cortlandt Manor. The second final project will focus on Catherine and her social work, including the USSC women’s relief fund, prison work at Sing Sing Correctional Facility, and the Colonial Dames of America.

The public can engage Holmes’ and Mullen’s research through the blog posts on HHV’s website, as well as exhibitions, public programs, and updates to the Sunnyside and Van Cortlandt tours. Their work brings more everyday voices into a field that has traditionally valued the stories of men.

Elizabeth Bradley, Vice President of Programs and Engagement at HHV, celebrates the summer fellows for expanding public understanding of the women who impacted the region in the past and present: “There are so many women whose stories have not been told since they’re not famous. It takes researchers such as the[se] two fellows to help us understand the lives of women who lived here in past centuries.”